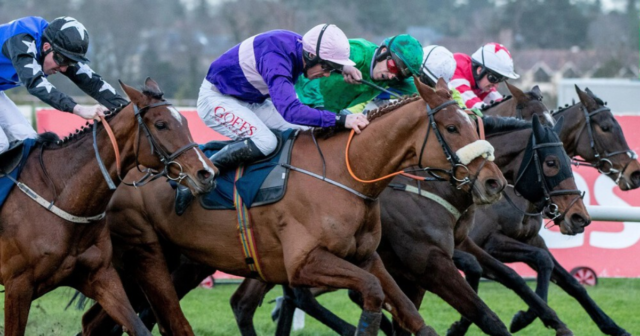 PUNTERS were tearing their hair out after a 40-1 shot saved the bookies millions in a thrilling photo finish.

Bettors were dreaming of huge windfalls after the first six races at Leopardstown were all won by favourites.

It meant bookies faced being wiped out in the last as Willie Mullins’ Pink In The Park lined up as 5-4 fav.

The liabilities for bookies had reached into the ‘significant’ seven figures by the time the concluding bumper rolled round.

And nervy traders would have been sweating as Patrick Mullins loomed up ominously alongside the leaders entering the final furlong.

Mullins switched inside to the rail and looked to be gaining ground only to be matched by three rank outsiders at the death.

Agonisingly for punters, Pink In The Park just ran out of gas and finished fifth, beaten just a length.

Victory went to Lily Du Berlais, whose only previous run was a win at Perth last July.

Simon Crawford’s runner prevailed by a nose from Battling Bessie, with Liberty Dance a short head behind and 16-1 Ashroe Diamond just three-quarters of a length behind the winner in fourth.

Paul Binfield from Paddy Power said the giant upset meant bookies were spared by the skin of their teeth.

He said: “Racing is a game of ups and downs and that’s been demonstrated so well at the Dublin Racing Festival.

“With only one winning favourite on Saturday, the books came out on top, but we knew Sunday would determine our weekend given all the shorties.

Best finish of the weekend!

Lily Du Berlais just prevails in a thrilling finale, Stuart Crawford pulling one out of the hat in the Grade 2 @coolmorestud @IrishEBF_ bumper.

“But Sunday couldn’t have begun any worse with six ‘jollies’ winning in a row, including in the handicaps and all of the big four ‘short ones’, before ‘lady luck’ struck for the layers with Call Me Lyreen prevailing at 20-1.

“Lily Du Berlais’ photograph will also be taking pride of place on the wall at Power Tower after winning the ‘lucky last’ at 40-1 with favourite Pink In The Park being furiously backed for bumper kings Willie and Patrick Mullins and her victory has helped save us a significant seven-figure payout.”

Sky Bet also said they were staring at a loss in the millions had Pink In The Park won.

One punter shared their losing bet slip, which would have returned £509.34 from a £20 stake had Pink In The Park won.

The acca on the all favs as win only paid roughly 65-1 but differed based on when you backed the horse and with which bookie.