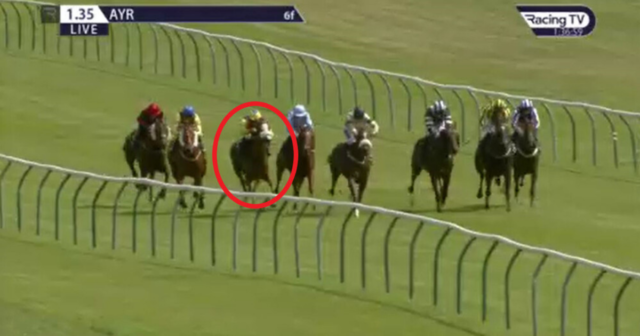 LUCKY punters were celebrating a huge windfall after backing a 999-1 no-hoper – who came through to win in a dramatic photo finish.

Amazing Alba looked to be travelling strongly in a 6f Class 5 contest from a sun-drenched Ayr on Monday.

But with a furlong to go the Alistair Whillans-trained runner appeared to have suddenly run out of gas.

Surrendering her lead to Roman Encounter, Amazing Alba’s odds drifted out to a massive 999-1.

She started the race at 7-1 under jockey Andrew Mullen but bookies clearly thought the mare had no chance, especially with Global Humor surging through under Paul Mulrennan.

Amazing Alba actually drifted to as far back as fourth after Sam James came through on the outside on Unashamed.

And with half a furlong to go, Global Humor was matched at 1.01 on the Betfair Exchange for a whopping £16,000.

That meant putting £1 on would have given you 1p profit.

Mullen rocketed down the inside rail, pinching the race in literally the final stride, with the victory confirmed in a photo finish.

It meant those who backed Amazing Alba in-running celebrated landing a 999-1 winner.

Unfortunately, Mullen picked up a two-day ban after the race for using the whip above the permitted level from approaching 1.5f out.

The win – as well as netting punters a small fortune – ended a wait of 149 days for victory for trainer Whillans.