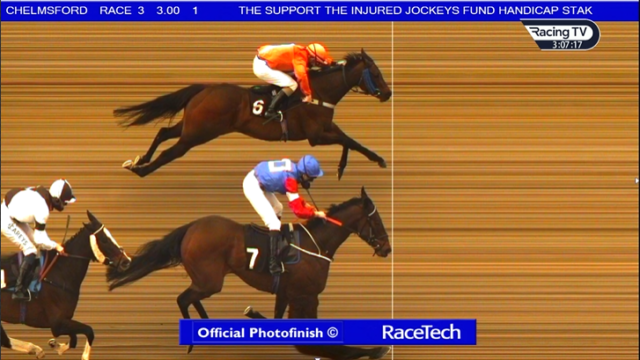 PUNTERS were left scratching their heads after the narrowest of photo finishes at Chelmsford.

The judge took an age to split the horses, but eventually plumped for 12-1 poke Crazy Spin.

Can you pick the winner of this photo finish at Chelmsford?

Trained by Ivan Furtado and wearing number six, Crazy Spin led much of the way and into the home straight.

But as he tired he hung right and eventual runner-up Anniemation – wearing the number seven – was always closing, no more so than as they crossed the line.

The commentator called it a ‘tight finish’ as the race ended in perhaps the understatement of the year.

As always, the photo finish was published after the race and punters were convinced it was a dead heat.

As commentator Richard Hoiles explained, the printed version of the photo would be clearer than the pixelated TV and online version.

But still not everyone was convinced and punters took to social media to vent their woes.

One said: “That’s a dead heat if I owned the 2nd I would appeal.”

Another added: “Ridiculous that they try to find winners in photos like that. There should be far, far more dead heats in horse racing.”

A punter who backed the winner clearly saw the funny side and joked: “Won by a mile! We’ll take that.”

Did you miss our previous article…
https://www.sportingexcitement.com/horse-racing/young-jockey-aidan-macdonald-makes-steady-improvement-as-bleed-removed-from-neck-after-being-rushed-to-hospital

In this article:Chelmsford, Horse Racing