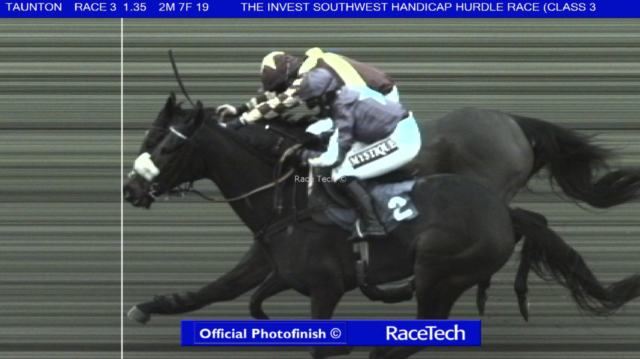 RACING fans have questioned a ‘very strange’ dead-heat photo finish that appeared to actually show one horse beating the other.

But after reviewing the footage and photo finish, stewards awarded a dead-heat in the three-mile thriller.

Viewers were not so certain though, and especially after seeing the photo finish on social media.

It looks for all the world like Premier D’troice gets ahead of Broken Quest in the very final stride.

Another wrote: “Called a dead heat in the end, feel like it’s another case of calling a dead heat because they can’t definitively swing one way or another.”

One comment read: “Broken Quest has never won that race. If you backed him buy a lottery ticket tonight! You’re seriously lucky.”

The result stood however, with bookies paying out on the joint winners.

Premier D’troice had been pulled up in three of his previous four starts but did manage a second play at Fontwell in September.

And that came before a two and three-quarter length victory at Fakenham in February.

But there is no denying he was the unfancied runner compared to Tom Symonds’ Broken Quest.

It looked for all the world like Broken Quest would repel the advances of the challenger after the final flight.

But it was in the very last stride stride of a race run on heavy going and over 12 hurdles that he was finally caught.

The two horses’ recent form could not have been more different.

Broken Quest won last time out at Ludlow on December 16, returning after a massive 982-day break and wind surgery.

But that counted for nothing in this last-gasp finish, that saw both horses awarded the win.

For punters that meant their winning odds were halved. So those who backed Premier D’troice at 28-1 were paid out at odds of 14-1.

But fans felt certain the outsider should have been given the win.

This is the latest photo-finish controversy to hit racing.

Punters were left scratching their heads after Elle Est Belle and Ishkhara Lady were deemed to have dead-heated at Cheltenham in November.

However the photo used to make the call was almost pitch black owing to the late race time.