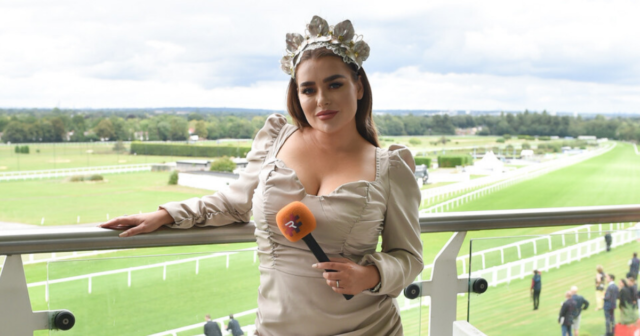 A FEMALE racing presenter was left ‘feeling sick’ after a male racegoer slapped her bottom while she was broadcasting.

Amy Christophers, who gained fame through her appearance on the reality TV show Married At First Sight, is a presenter for Racing TV’s social media channel Raceday.

Christophers is a presenter for Racing TV

She appeared on the reality TV show Married At First Sight

The 35-year-old was interviewing punters at Beverley on Saturday when the incident happened.

The group of men appeared to be having good-natured fun with Christophers, as she asked them to show her their best jockey impressions.

But after mimicking the riding of a horse, one of the men inappropriately touched her and said ‘put that online’.

She was visibly shocked and challenged the man once the cameras stopped rolling.

Christophers told the Mail: “I felt degraded and embarrassed.

“He was trying to show me up in front of people.

‘”After the cameras stopped I turned round and said ‘do you really think that was appropriate?’

“I don’t expect to go to work and have my backside slapped by a total stranger. It’s not on. He made me feel sick.”

She added: “If you think sexual contact without consent is ok then maybe you’re the problem too!”

Sally Iggulden, chief executive at Beverley, said the track has a zero-tolerance approach to “inappropriate disrespect” and is trying to find the racegoer so they can issue him with a ban.

She said: “We’re appalled by the actions of one individual at Saturday’s meeting.

“We reached out to Amy immediately after the incident to offer our sincere apologies and support.

“Beverley racecourse has always operated a zero-tolerance approach to any form of inappropriate disrespect and we’re now in the process of studying CCTV footage of the incident.

“Anyone found to have committed any offences of this nature can expect a lifetime ban from Beverley racecourse.”

In this article:feelingsick, socialmedia, tvshow