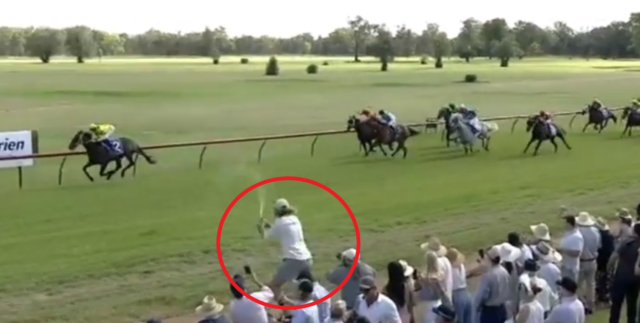 A RACEHORSE owner was fined for celebrating his big winner – after video captured him spraying beer and falling over.

Sam Gray leaped onto the fence to cheer home runaway winner Notabadidea in a race in Australia.

As the horses thundered towards the post, Gray was seen on the railing spraying his beer around like champagne.

His rigorous shaking then saw him lose balance and topple over onto the track below – as the horses continued to run past.

Fortunately none of them were over that side of the track so Gray was never in any real danger.

He was lighter in the pocket, however, after race bosses decided to fine him for his antics.

Stewards overseeing the Gilgandra Cup in Gilgandra, New South Wales, charged Gray with acting in a way that was ‘detrimental to the interest of racing’.

Gray, who as co-owner of the horse has pocketed a share of £141,000 from its winnings, pleaded guilty to a charge of misconduct, improper conduct or unseemly behaviour.

Punters were split on the punishment.

One who claimed to have been at the track during the incident said: “Yes, I was on course that day not far from where this clown put on his performance.

“Some people should never drink alcohol especially in the hot sun.”

While another said: “Oh dear. Probably got off lightly there.”

Australia and New Zealand have seen a few eyebrow-raising racecourse incidents over the past year or so.

One woman jiggled her boobs at jockeys as they rode past – while this bloke risked death by running into horses mid-race.

Did you miss our previous article…
https://www.sportingexcitement.com/horse-racing/royal-ascot-slashes-crowd-limit-this-year-but-70000-punters-expected-at-aintree-for-1million-grand-national