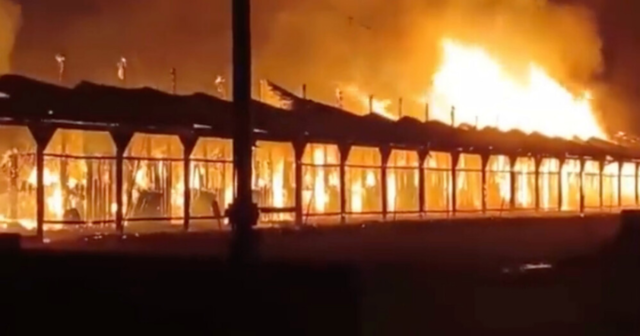 ONE racehorse had a lucky escape not once, but twice in the space of 24 hours.

First she threw off her rider before a race and soon found her way on to the nearby motorway.

Extraordinary videos were posted online of the horse running up and down the road with cars slowing down and stopping to avoid hitting the filly.

The horse – named Bold And Bossy – reportedly escaped with just a few cuts after the ordeal.

But if that wasn’t enough, the horse was later that evening one of seven to be rescued from a huge fire at Ellis Park.

A barn caught alight and meant racing had to be cancelled while firefighters battled with the blaze.

General manager Jeff Inman said: “We had one minor injury to one of our equine athletes, but other than that everyone’s safe and sound.

“That’s the most important part of this.”

The fire was spotted at 4am and quickly attended to by emergency services and the racing community. It’s thought it was an electrical fire.

Inman added at a press conference: “We always pulls together.

Just in: Ellis Park officials tell Eyewitness News a race horse bucked its rider and escaped the track before the first race this afternoon. It traveled along US-41 before the owner managed to rescue it at the Evansville Water Department. pic.twitter.com/YWbaklhDaO

“We still need some receiving spots for Friday’s race meet. The horsemen all came up to make sure we cleared space and got bedding for the horses.

“Just the grooms and everybody running out at four o’clock in the morning to get those horses out… Everybody back there always pulls together, without fail.”