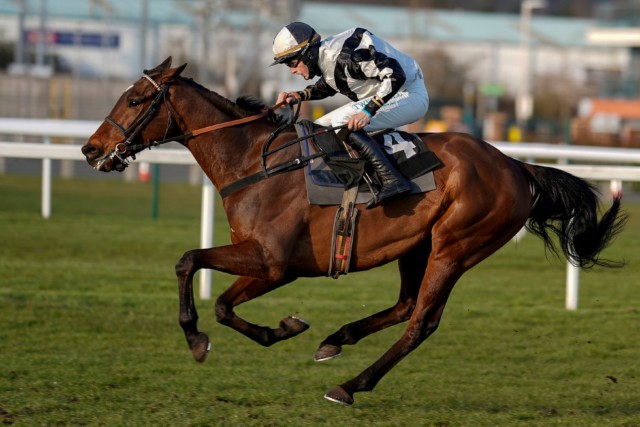 ANDREW MARTIN was ‘over the moon’ to see his rank outsider Charlie’s Glance destroy the field in Newbury’s bumper on Saturday.

Not least because the Cotswold-based owner and trainer shrewdly backed his charge at a whopping 150/1 to win the night before!

The five-year-old faced stiff competition from Our Jester and Paul Nicholls’ Silent Revolution.

But breezed to the front three furlongs out and kept on strongly to win by five and a half lengths.

Ridden by Harry Beswick, Charlie’s Glance opened up at 18/1 before shortening to 14/1.

But Martin backed himself early at more than TEN TIMES the SP.

Owned & trained by Andrew Martin, Charlie's Glance is related to a number of National Hunt & does the business first time out under Rules in the finale at @NewburyRacing

“Why not? I pay a lot of money to train him, so you’ve got to take your chances when they come.

“It might not have come off today, but, in the bigger scheme of things, the money I put on last night would have been nothing compared to what we’ve invested to get him here.

“I’m over the moon. It’s fantastic to come to Newbury on a Saturday and beat all the top trainers – I’m a farrier by trade.”

He added: “That was very nerve-racking as you put a lot of effort into these horses.

“At home, the horse had done everything we’d asked of him, but how good he was, we didn’t know. We knew he was quite good, but the reason I’m here today, and it’s a big step, was all to do with the course and the ground.

“It didn’t matter if it was the Champion Bumper, we needed to come because we needed to find out what we had, but we needed the right course and right ground.

“If he’d finished mid-division we’d have gone somewhere less, but he’s more than done it well.

“The two races I earmarked were today and Aintree’s bumper at the Grand National meeting provided the ground is okay as the course will suit him there too.

“He’s a super jumper and could be a Stayers’ Hurdle horse in time; he’ll stay a trip.”

Did you miss our previous article…
https://www.sportingexcitement.com/2021/03/08/clueless-motorist-drives-onto-sedgefield-racecourse-and-gets-swarmed-by-security-while-trying-to-find-car-boot-sale/

Advertisement. Scroll to continue reading.
In this article:Aintree, Newbury, Sedgefield