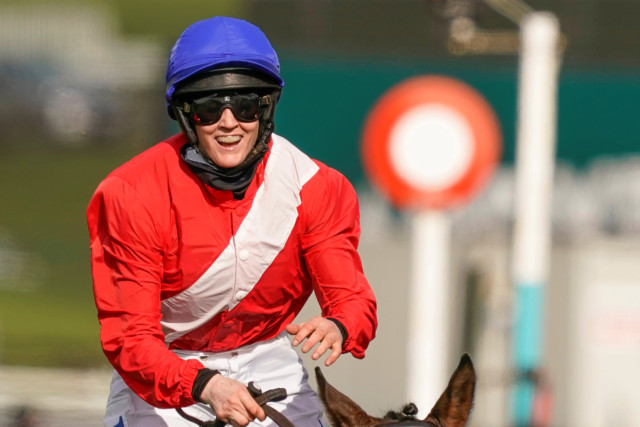 IT’S official. Rachael Blackmore is the Queen of Cheltenham.

The 31-year-old daughter of a teacher and dairy-farmer was no unknown in the racing world before the week kicked off, but will have earned thousands of new fans as she became the first female to win the award.

But you can get forget the gender tag – she’s as good as it gets.

She rode Honeysuckle to a thumping win in the Champion Hurdle and fellow Henry De Bromhead star Bob Olinger to win the Ballymore Novices’ Hurdle.

Sir Gerhard’s Champion Bumper win was a result of one of, if not THE ride of the week.

Blackmore may have fallen agonisingly short in the Gold Cup as stablemate Minella Indo took the big one.

But Grade 1 wins on Telmesomethingirl, Allaho in the Ryanair and Quilixios in the Triumph Hurdle almost made up for it.

Punters had Willie Mullins number one Paul Townend down as the red-hot 1-3 favourite before racing got under way. Blackmore was a 14-1 chance.

Ruby Walsh, whom the Leading Jockey award is named after, said: “It’s been incredible what’s she’s done, tactically all week she’s been in the right place on so many horses.

“The wider world will see her now for what she wants to be, and that’s just a jockey.”

Not one for the attention, Blackmore has had no choice but to be busy in front of the cameras this week.

After picking up her latest trophy, she said: “I’m genuinely just so overwhelmed by these last few days.

“It’s all about the horses you’re getting on, and I just feel so lucky to be riding for the people I’m riding for.

Blackmore and Honeysuckle are unbeaten in 11 runs

“I can’t comprehend that I’m the leading rider – it’s a bit surreal.

“Getting an award from AP McCoy in the shape of Ruby Walsh is crazy.”