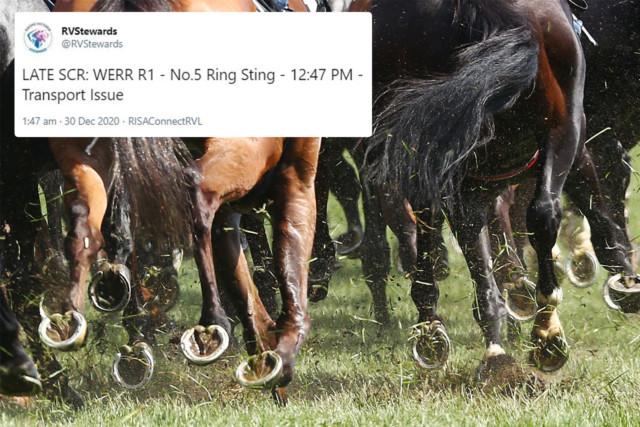 RACING fans joked ‘it’s getting worse’ as another rude horse name emerged after Lovin’ Deqoque and Get On Deqoque ran in Australia.

This time it was the turn of the curiously named Ring Sting.

The gelding – a horse which has had his testicles removed – was due to make his debut at Werribee racecourse, near Melbourne.

However he was scratched from the contest after a ‘transport issue’ meant he could not make it to the track in time.

This prompted some funny responses on Twitter from eagle-eyed racing fans.

In reply to a tweet saying the horse was now a non-runner, one replied: “Couldn’t be a***d?”

Another quipped: “Too many curries?”

While in response to another Twitter user highlighting the unfortunate-sounding name, a fellow racing follower wrote: “It’s getting worse!”

Fans were in stitches over Lovin’ Deqoque and Get On Deqoque.

But laughter aside, their rude names asked serious questions of just how they were allowed by authorities.

Racing chiefs have to grant permission for owners to name their horse as they want.

Sometimes offensive titles can slip through the net, as was the case with ‘Jungle Bunny’ in England earlier this month.

The racial slur was the name given to a runner at Wolverhampton.

The British Horseracing Authority apologised for the oversight and the horse’s name was changed to Jungle Bells.

Lovin’ Deqoque and Get On Deqoque are both looked after by respected Australian trainer Darryl Ward.

Racing Australia boss Myles Forman has explained why the names were allowed.

He told 7news.com.au: “We contact owners when they lodge the names to make sure we know how the horse names are pronounced and what the meaning of the name is.

“And in this case it’s De-quo.

“Look, a combination of letters and words can mean different things to different people.

“In this case we were confident it should be pronounced De-quo.

“Therefore there’s nothing here that prompts concern for Racing Australia.”