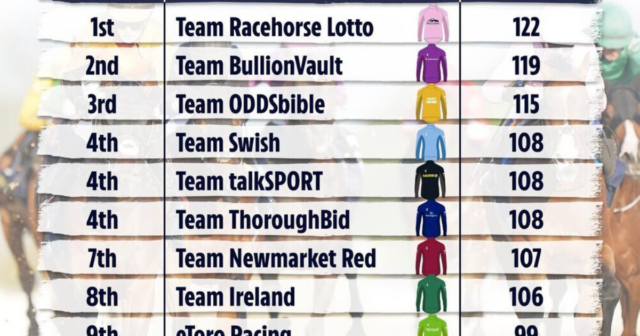 WEEK Three of the blockbuster £2million Racing League takes place at Lingfield on Thursday evening – and it looks like being a cracker.

Last week at Doncaster threw up some serious surprises, including Frankie Dettori failing to record a winner.

Here, we look at five things to look out for from the Surrey track.

As far as punting goes, you can do a lot worse than listen to Kevin Blake.

The Team Ireland manager said his phone was ‘melting’ after he tipped an 800-1 treble at Cheltenham Festival in March.

He hasn’t quite been as hot with his team thus far in the league, although they did land a double at Donny.

Maybe Blake’s first appearance in person at the track can spur his team on to greater success again.

Saffie Osborne continues to go from strength to strength.

She currently sits top of the jockey standings – and first in line to collect a £25,000 bonus.

The daughter of jockey-turned-trainer Jamie deserves every success after overcoming awful injuries and death threats.

Can Newmarket Red bounce back?

One of the big shocks of Week Two was Team Newmarket Red’s drop down the leaderboard.

The pre-tournament favourites, Dettori and Co plummeted from top spot after Week One to lie seventh now.

Luke Morris rides all of their representatives on the night so he is set for a bumper evening.

Huge swings in the standings

The beauty of this format is that, with ten of the 12 runners picking up points in every race, huge swings are not only possible, but expected.

Betfair revealed their market for the outright winner, with Team oddsBIBLE being slashed to 7-1 from 16-1 after Week Two.

Hollywood and Lingfield – two words you don’t often see next to each other.

But there will be a touch of A-lister magic on Thursday when Run Forrest Run, erm, runs.

The George Baker-trained three-year-old has two wins from his past four and could land another for jockey Josephine Gordon.