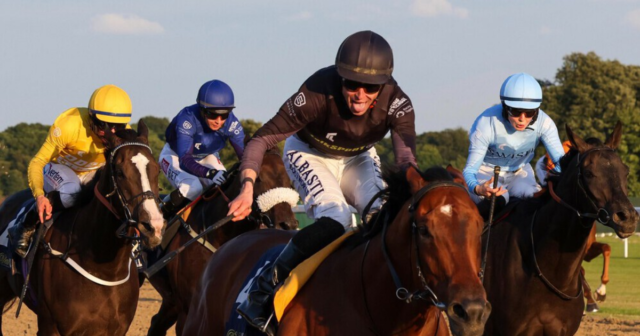 THE Racing League bolted up with a bang at Newcastle.

And it turns out the bookies were right straight away as the pre-competition favourites surged to the top of the leaderboard – but there were huge changes elsewhere.

The Racing League got off to a belter on Thursday night

Frankie Dettori was busy at Glorious Goodwood on Thursday.

But that did not stop his Newmarket Red team from picking up the most points on the night – despite not winning a race.

Earmarked by bookies as the favourites before the first evening of racing, the top team made up of trainers John Gosden, Robert Cowell, Sir Mark Prescott and David Simcock showed their hand.

They had three second-placed finishes and two thirds as they collected 85 points from a possible 150.

As a result, Newmarket Red shortened as favourites to 9-4 from 11-4.

What the bookies say

Betfair spokesman Barry Orr commented: “What a magic opening night for the Racing League in Newcastle and the Newmarket Red team showed their class and how difficult they will to beat in this format.

“It’s all set up nicely for next Thursday.”