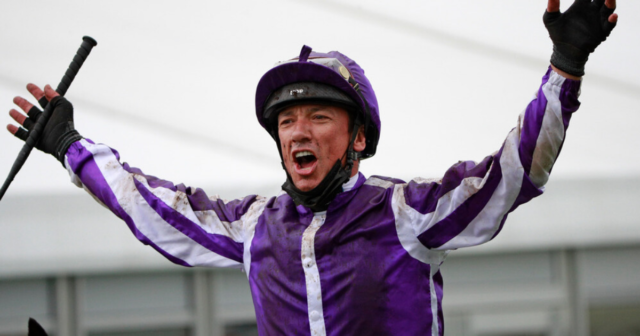 SO we know the teams, the jockeys and the trainers – but who is going to win?

That is the question on everyone’s lips ahead of the start of the blockbuster £2million Racing League.

Will Dettori be toasting another victory in the brand new Racing League?

Will you go with Frankie Dettori’s top Newmarket Red team, who on paper look the ones to beat?

What about unstoppable Oisin Murphy alongside Hayley Turner and Sean Levey for Team Thoroughbid?

Or what about the Irish raiders spearheaded by David Egan and with the O’Brien boys the trainers?

It can be tricky to choose, but luckily for us Betfair have sifted through the info and come up with some prices ahead of the first race next Thursday.

Betfair spokesman, Barry Orr, commented: “We make the Newmarket power-houses of Cowell, Gosden, Prescott and Simcock favourite at 11-4 with Team talkSPORT 7-2 second best in the market.”

Each team is made up of 30 horses, two to four trainers, three jockeys and, in some cases, a manager too.

How does it work?

Races in the competition are handicaps for horses with an official rating of up to 90.

Each fixture will consist of races over five furlongs to a mile and a half.

It means the teams need to plan carefully which horses they put forward.

Between each team, they can put forward a stable of 30 horses to be used throughout the competition.

This stable will need to cover races of all distances.

Some teams may be stronger in the sprinting division than over the longer trips so pay close attention!

After week four there is a transfer window when up to three horses in each squad can be swapped.

That’s more than the majority of the horses involved will ever race for and why trainers have signed up in their droves.

The overall winning team after six weeks — after already scooping plenty of the prize money in each race — will then take a cheque for £150,000.

This is split between the trainers, stable staff, owners and jockeys.

There is also a bonus £50,000 up for grabs for the top three jockeys in the whole competition.

Each team will wear bespoke Racing League colours with their team sponsor on the front.

Did you miss our previous article…
https://www.sportingexcitement.com/horse-racing/furious-jockey-disqualified-and-banned-after-he-lost-weight-sweating-in-heatwave