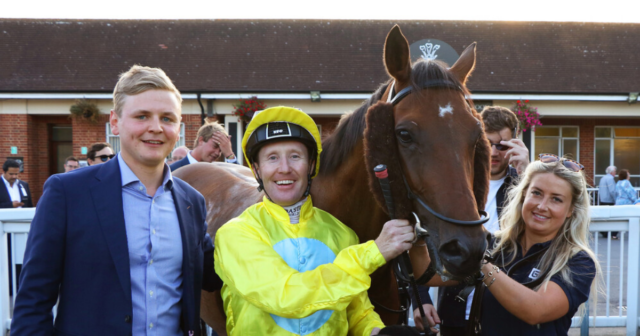 GEORGE BOUGHEY has made a hell of an impact in just two years training.

Now the Newmarket young gun has his eyes on a money spinning win in the Racing League.

Boughey pictured with his first ever winner Three C’s

At just 29, Boughey has built up one of the most fearsome stables in Newmarket.

When he started out in 2019, Boughey had just four horses mostly owned by close mates and family.

Now he’s moved yards to Saffron House and is already full with a string of 50 and 20 more at a pre-training yard ready to move in.

It’s safe to say Boughey is pleased as punch with how things are going.

He said: “It’s been a year that if someone had told me before we’d have 35 or 40 winners by December I’d have been absolutely delighted.

“We started with four horses two years back and to have had 52 winners already by the end of July, with unraced horses still to come in, it’s going better than anyone could have dreamt.

“My big aim now is to win a Group race at home before the end of the year. We’ve had more winners than last year, we’ve had a Listed winner, a Group winner in France and so now the next step is a Group winner here.”

Boughey grew up in Dorset before flying the nest to head to Newcastle University which is where he caught the racing bug once and for all.

He then spent time in Australia with the legendary Gai Waterhouse before working under Hugo Palmer in Newmarket for five years.

From there it was a no brainer even if it meant heading into the unknown with just a handful of average horses.

Now Boughey trains for football super agent Kia Joorabchian, Highclere and Nick Bradley Racing with too many horses to fit in his yard. It’s been quite the whirlwind.

And had the Racing League kicked off when it was originally planned, Boughey wouldn’t have even been allowed to take part despite his best efforts.

Now one quarter of Team Racehorse Lotto with Stuart Williams, William Knight and James Ferguson, Boughey is licking his lips at the prospect of the £50,000 prize pots.

He explained: “I heard about it at the start like everyone else and was very keen to be a part of it.

“But when it was first being discussed I hardly had any horses so it wasn’t anything I was really able to commit to. Two years ago when we started, our horses wouldn’t have been at the ability to run in these races anyway.

“So we were definitely a later addition. In our team, all four of us were keen to do it all along but just couldn’t get a slot.

“Once the French team pulled out we jumped at the opportunity. I got very lucky myself, it’s funny how things can work out sometimes.”

Like most, Boughey has heard some of the criticisms fired at the Racing League but is confident the positives outweigh any negatives.

He added: “I think it’s a good initiative, anything to inject more money into the sport has to be looked at very seriously.

“Obviously there’s places that can be improved I think and no one is hiding from that, like every first go it’s almost a demo run isn’t it?

“For example this week we run a horse Air To Air who was favourite for the Britannia at Royal Ascot. I’ve been holding him back and holding him back even though he’s been kicking the door down.

“For me you can’t run a horse for four grand when you’re running for 25 three weeks later. It’s changed the way people are programming their horses and you might not go for what you’d usually consider the ‘big race’ but you’re going for the race in the Racing League that’s worth a lot more and fair play to them, it’s working and they get a better type of horse there.

“It’s all very new for everyone, I don’t think I’ve ever been in a situation like it but that’s not to say we’re not enjoying it.

“Trainers in my generation tend to talk a lot to each other about their horses and plans like maybe some of the older guys don’t, but I think that’s changing with this too.

“We’ve got a WhatsApp group with all the trainers in and I’m talking to Billy Knight and Stuart Williams about what we can run and how well we think horses are handicapped and the like.”

Joining Air To Air tonight at Doncaster will be stablemate Khatm and Boughey revealed he missed out on running him last week due to a coin toss!

With teammate Knight also wanting to field a horse in the ten furlong heat at Newcastle, Boughey gets his go this time round.

He laughed: “I lost a toss of the coin with Billy Knight to run in the mile-and-a-half race last week so I’m allowed to run Khatm this week in the race I want this week. It means he can go over ten furlongs.

“Air To Air lost a shoe jumping out the stalls at Ascot and it was very quick ground that day. “Jamie Spencer just got back and said he didn’t use his stride the whole way and somehow he still finished ninth, he still beat over half the field. I’ll be honest, I think he’s got a great chance.”

Did you miss our previous article…
https://www.sportingexcitement.com/horse-racing/popular-jockey-michael-pitt-19-found-hanged-at-petrol-station-inquest-told-as-pals-pay-tribute-to-cracking-lad