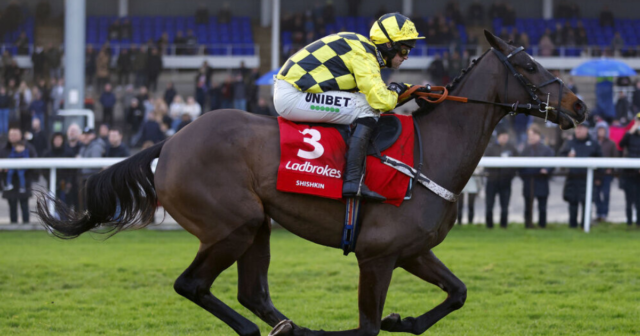 SATURDAY looks set to be a real blockbuster with plenty of tasty punting contests as well as the chance to see two of racing’s genuine superstars.

The clash between Shishkin and Energumene at Ascot is the obvious starting point but Haydock also hosts an excellent card, full of Cheltenham Festival clues.

Arguably the most talented horse in training, Shishkin gets the chance to measure himself against Ireland’s best on Saturday.

His clash with Energumene in the Clarence House Chase shapes up to be one of the races of the season and is as close to can’t-miss TV as it gets.

The winner will undoubtedly assume clear favouritism for the Queen Mother Champion Chase at Cheltenham in March.

Whenever Paul Townend makes the trip over for weekend racing in Britain it’s worth taking note.

It may only be for two races on Saturday but Townend has a leading chance in both the Graded races at Ascot.

Rides on Energumene and My Sister Sarah could mean the Irish champion makes the trip back to the homeland a happy man.

That said, there’s plenty of excellent action elsewhere and from a punting perspective the Peter Marsh (2.35 Haydock) looks the pick.

There’s £75,000 up for grabs for the winner of the race, with the favourite being last year’s winner Royale Pagaille at 9/4.

He has some decent form over hurdles and has been on podium in good company on his past two starts. His trainer Alastair Ralph is in decent form and he has another each-way shout.

What the bookies are saying

Paddy Power spokesman Paul Binfield said: “This looks like being one of those historic racing clashes where anyone fortunate enough to be attending Ascot on Saturday will be telling their grandchildren ‘I was there’.

“So far the market hasn’t exploded, but we’d expect momentum to gather from here on in as the hype builds.

“Before the final declarations Shishkin was more popular after Nicky confirmed him a runner and some ultra-shrewd punters managed to obtain 2-1 about him, which was our first ante post price