Racing punter celebrates ‘once in a lifetime’ winner after crazy TEN-fold nets him thousands from just £3.65
Advertisement 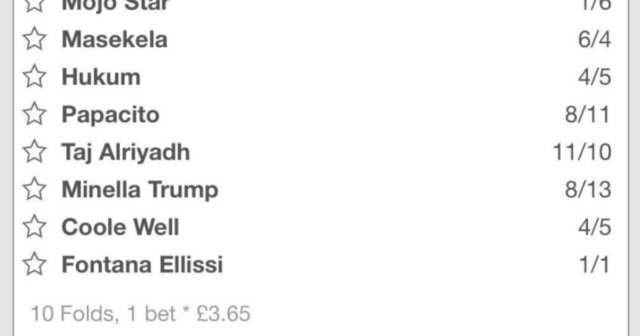 A SHREWD punter was celebrating a ‘once in a lifetime’ winner after a crazy ten-fold bet netted him thousands from just £3.65.

The ‘ridiculous’ bet, which drew widespread praise from fellow punters, resulted in a tasty £3,536.87 windfall.

An incredible run of ten winners netted this punter more than £3500 from just £3.65

Amazingly, the odds of all ten horses winning were a giant 968-1.

But they did just that on a bumper Saturday of action.

First up was Adnaan in the 1.00 at Newmarket where Ben Curtis steered the 6-4 shot to a length-and-a-half victory from 4-1 Laheg.

Just 15 minutes later Mojo Star romped home at Newbury at 1-6 odds – the first of three straight winners there for the punter.

Taj Alriyadh made it three from three in his young career with victory by just a head as 11-10 favourite in the 2.40 at Ripon.

It was back to Newmarket for the 3.05 then where Great Ambassador triumphed as 5-2 favourite under Richard Kingscote for trainer Ed Walker.

Minella Trump then won the 3.20 two-horse race at Perth by seven lengths to keep the bet rolling with ease.

Papcito kept up his 100 per cent record with a half-length victory over 6-1 Rabat in the 3.35 at Doncaster.

That meant it was down to two races at Market Rasen to land the jackpot.

Coole Well did the job for in-form trainer Fergal O’Brien in the 2m½f contest over hurdles at 5.00.

‘ONCE IN A LIFETIME’

Then just over half an hour later Fontana Ellissi demolised rivals by six-and-a-half lengths to land the bet in style.

The punter wrote alongside a photo of their winning bet: “As far as £3.65 10 horse accas go, this surely has to be up there, if I don’t say so myself. Get in!”

Another posted: “Absolutely fantastic for a small stake it’s a once in a lifetime, hopefully not, very well done.”

And a fellow punter wrote: “Cracking. I feel good landing a double!”

Did you miss our previous article…
https://www.sportingexcitement.com/horse-racing/top-jockeys-oisin-murphy-and-hollie-doyle-need-to-step-up-and-back-racing-league-the-sport-is-counting-on-them