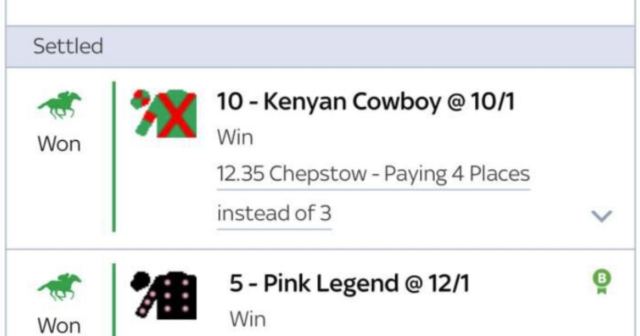 The bettor stuck £5 each-way on three horses winning, or at least finishing in the places, last Friday.

The punt got off to the perfect start when Kenyan Cowboy, backed into 6-1 before the off, prevailed by three-quarters of a length from 3-1 joint-favourite Investment Manager in a 2m3½f handicap hurdle.

Charlie Deutsch then struck on Pink Legend in a 2m5f handicap chase at Ascot.

The Venetia Williams-trained runner had been backed into 15-2 and scored by three lengths ahead of 16-5 favourite Guy.

By this stage things were looking really good and the punter’s cash out option had rocketed up £736.62.

That’s a brilliant return from a tenner – but would you have cashed out or let the bet run?

The punter decided taking the money and running was the better option as he settled his bet for £736.62.

But that turned out to be the mother of all bad calls as 18-1 Brian Boranha – who had not won in more than three years – plugged away gamely to win at Catterick.

Amazingly, the £5,881 connections got for winning the contest was less than half the bettor would have got had they let their bet run.

Fortunately, they had covered themselves somewhat by backing the horse in singles, still raking in more than £2,000 in all.

But he would have been celebrating a massive £13,865.50 payout if he had left the bet alone.

Asked by one fellow punter if he had any more tips, the bettor replied: “Yeah, don’t cash out.”

Cashing out can sometimes have brilliant consequences.

Paul Dean won £250,000 off a fiver despite the final leg of his selection falling.

The bettor struck a deal with Betfair at the Cheltenham Festival last March – and watched on as odds-on favourite Envoi Allen fell in the Marsh Novices’ Chase.

Dean stood to win more than half a million quid from his five-fold bet – and would have had Envoi Allen justified favouritism.

But he shrewdly cashed out for half that value – had he not then the whole bet would have gone down as a loser.

The punter did back the big price winner but missed out on more than £10,000 he would have got had he let his original bet run