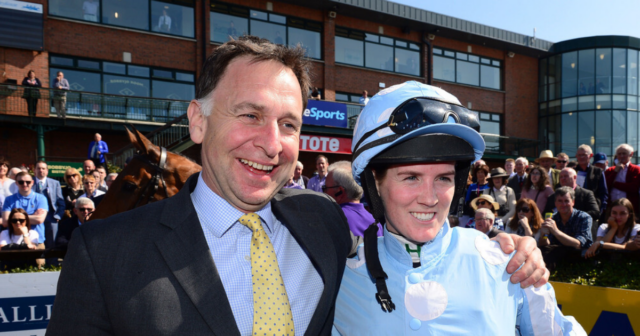 A HORSE who has never raced under rules but is being talked of as a potential superstar is getting backed for glory – thanks to an amazing stat.

An Tobar has raced just once, winning a point-to-point in Ireland by 20 lengths.

Could An Tobar be another Cheltenham winner for De Bromhead and Blackmore?

Massive debut performance from @BleahenBrothers grad AN TOBAR, winning the 5yo maiden by 20 lengths for @BallyboyStables . Sold @Goffs1866 to @BrianAcheson and Mags O’Toole after being broken at home
Well done all pic.twitter.com/5GJqseeRgE

Willie Mullins and Henry de Bromhead’s domination of Cheltenham Festival in recent years has shown the strength of the Irish horses.

And it looks like De Bromhead, who has teamed up so successfully with Rachael Blackmore, could have the perfect horse to fill the hole Honeysuckle will leave when she retires at the end of the season.

Five-year-old An Tobar won the O’Connell Group 5yo Geldings Maiden with ease at Ballyvodock back in January.

But it is what has happened since that has really made the racing world sit up and take notice.

The horses who were second, third, fourth, sixth and seventh in that race have all won since.

As far as form goes, it doesn’t get any better than that.

Good For Scope, runner-up to An Tobar, won at Lingstown in March while third-place Castleward won by eight lengths on his next start at Dromahane.

Present Fair, fourth to An Tobar, has won twice since, while sixth and seventh-placed Coilrock and Future Benefits have also tasted victory.

Mind you, it’s worth remembering that An Tobar hammered all these horses without even coming under any pressure from the jockey.

It might still be more than six months away but already punters are licking their lips at the prospect of backing him for Cheltenham.

The horse can be found at a best-price 20-1 for the Ballymore, with some firms going 16s.

While he is available at 25s for the Albert Bartlett, a race won last year by 18-1 shot The Nice Guy.