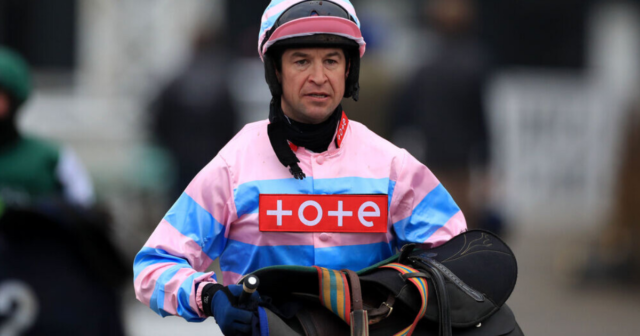 THE BHA closed its case against Robbie Dunne by saying it’s time the weighing room moved out of the 1950s.

The panel that has sat at the BHA for five days of evidence hopes to reach a verdict on Thursday over allegations the rider bullied and threatened Bryony Frost.

Robbie Dunne, who denies the allegations, faces a ban of up to three years if found guilty by an independent panel

Closing the case for the authority, barrister Louis Weston slammed the ‘rancid’ and ‘sour’ culture of the weighing room and compared it to a Carry On film adding there was a great deal of ‘silence’ in racing and that evidence that seeks to keep this ‘omerta’ in place should be ignored.

Weston said: “It’s clear that Miss Frost knew by stepping up and confronting Robbie Dunne as she did, she would run the risk of going against the grain of her procession and would be ostracised and excluded.

“Jockeys not talking to her, valets not working for her – it’s outrageous they behave in that way because she had the guts to stand up to a bully.”

Weston told the panel Dunne had a ‘vendetta’ against Frost and had mocked her interview style.

He added: “It’s unacceptable for this sport to have this conduct. It cannot be that Miss Frost can compete on a level playing field only to find when she comes back to the weighing room she’s met by Mr Dunne acting as some head of patriarchy, reenacting social attitudes of the 1950s in his capacity as self-employed enforcer because of traditions he perceives of the weighing room.

“He dropped his towel in front of her and dangled himself, no accident, no confusion – a deliberate act.

“He made sexual comments about how he would give women jockeys a ride, no accident. Just 1950s humour, Carry On kind of thing – let’s make jokes about women.”

Weston concluded by criticising the jockey witnesses called by Dunne’s team on Tuesday.

He said: “If what’s being said is there’s a weighing room culture that allows one jockey to threaten another with serious injury or call her a whore or a s**t, then that culture is sour, rancid and should be thrown out and discarded.

“It’s time, if ever it had its time, has gone. It’s breathtaking to hear Mr Dunne’s friends speak to their tolerance of that conduct.”

In response and in closing the defence case on behalf of Dunne, who denies the allegations, Roderick Moore claimed Frost was not a ‘credible’ witness.

Moore said Frost could not be scared of Dunne as she had confronted the Irishman in the past but admitted some of Dunne’s behaviour could be considered as ‘teasing’ but was not that of a bully.

Moore’s main argument was it would be ‘grossly unfair’ to find Dunne guilty when considered against the weighing room as a whole.

Using Lizzie Kelly and Lucy Gardner’s evidence, where they gave their support to Dunne and the weighing room, Moore said it was impossible for lawyers in ‘suits’ to judge jockeys from their ‘air-conditioned’ rooms.

Moore explained: “To get to the right answer, it’s essential to understand the weighing room. We have to take ourselves out of this warm, safe place and into it.

“Because it’s a dangerous sport, they have to tell each other when they think there is a danger, including the way one of their colleagues is riding.

“We’ve been told by numerous people that’s what happens. The language used by many racing professionals is weapons grade language, day in and day out.”

Moore added later: “The way the weighing room is, shouldn’t be news to anyone. The BHA are in and out of the place on a daily basis.”

Responding to suggestions the weighing room needs to change, Moore replied: “That’s for the future, that’s a policy matter, that’s a political matter. You can’t fairly judge Mr Dunne against anything else bar the current weighing room.”

If found guilty, Dunne could be banned for up to three years and faces a fine of up to £15,000. The three-person independent panel could announce their verdict as soon as Thursday afternoon.

Did you miss our previous article…
https://www.sportingexcitement.com/horse-racing/racing-punter-put-2-on-six-horses-and-walked-away-a-millionaire-the-unbelievable-story-of-britains-biggest-winner