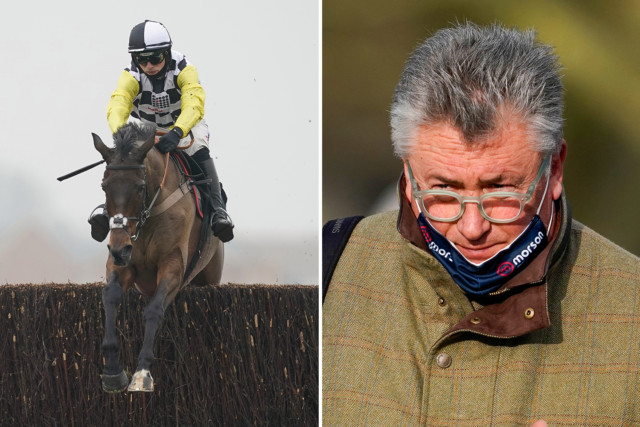 THE Paul Nicholls juggernaut is set for a rare quiet weekend after the string were given their annual flu jabs.

Most of the Ditcheat team have received their jab ready for the second half of the season.

Next Destination heads the Nicholls team this weekend

With the likes of Cheltenham, Aintree and Punchestown to come in the spring, many of the sports big names use this period to recharge the batteries.

Nicholls has given three-quarters of his string a jab over the past two weeks and they will be ready to fire again from next week.

Even by his standards, Nicholls has enjoyed a stellar start to the campaign and currently sits top of the trainers championship with close to £1.5 million in prize money from 109 winners.

But the quiet spell doesn’t bring things to a complete halt and Nicholls has three runners at Warwick on Saturday.

They include the ex-Willie Mullins-trained Grade 1 winner Next Destination.

Betfair ambassador Nicholls said: “We only have the three runners this Saturday so you would be right in thinking we are a little quiet.

“But 75% of our horses had their flu jab a fortnight ago and will be ready to run in the next couple of weeks and the 25% that didn’t have been ticking over lovely.

“It’s something I’ve always done and it works well for us.

“Next weekend we’ll be ramping up again with Ascot and Haydock taking centre stage.

Next Destination won on his first start over fences for Nicholls

“Next Destination was very good in winning tidily on his debut over fences at Newbury at the end of November and is starting to make up for lost time after being on the sidelines for more than two-and-a-half-years.

“He was a Grade 1 winner over hurdles in Ireland, is progressing steadily, will relish the testing conditions and is in tip top shape.

“So I think he must go close in this even though he has to give 5lbs to his two rivals.”

He added: “Sending Love will love the ground at Warwick no matter how heavy it becomes, and will be much happier going left handed after finishing third in the Ballymore Winter Hurdle at Sandown.

“Everything went wrong for him there because they crawled and the race turned into a sprint which didn’t suit him at all.

“Given a decent gallop in this competitive Grade 2 Hurdle I am hopeful of a much better show. He is in the mix.”

Completing the Nicholls trio is Gold Bullion in the closing bumper.

Nicholls said: “We have an exciting bunch of bumper horses this season and Gold Bullion is another who is giving us the right signals at home.

“He is a nice individual, has a great pedigree being by Fame and Glory from the family of Crystal D’Ainay and I am expecting a decent run from him though he he will learn for the experience.”