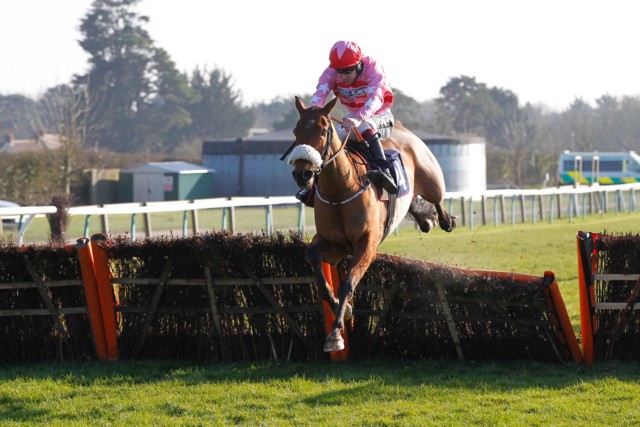 BREWIN’UPASTORM continued his resurgence when bagging the National Spirit Hurdle at Fontwell.

Olly Murphy’s high-class eight-year-old had lost his way over fences – but he is now 2-2 since returning to the smaller obstacles.

Brewin’upastorm impressed at Fontwell on Sunday

He was a very talented hurdler as a young horse, finishing fourth in the 2019 Ballymore at Cheltenham, but he had struggled for form in two chase starts this winter having unseated his rider at last year’s Festival.

All eyes were on the 4-6 favourite McFabulous, who was heading into the 2m3f Grade 2 with a dominant win in the Relkeel Hurdle under his belt.

But Brewin’upastorm (3-1) arrived in similarly good heart having won easily at Taunton on his most recent outing.

And he looked to have McFabulous’ measure a long way from home, as the odds-on jolly jumped poorly and was never really travelling with his usually fluency.

Aidan Coleman took aim at his big rival at the top of the straight and soon swept by on Brewin’upastorm, who stayed on strongly to score by five and a half lengths.

Coleman said: “He was great, but I still think there is improvement, which is brilliant because has won that with a bit in hand.

“I still don’t think he’s the finished article. I think fences at the beginning of the season took their toll on him mentally.

“I thought Taunton was a a good performance but that there was improvement to come, and he has taken a big step forward today.

“He was a bit slow over the first couple but when I switched him out he came alive.

“I wanted to take on McFabulous at the last, but when I saw he was under pressure down the back I committed sooner than I had planned.

Did you miss our previous article…
https://www.sportingexcitement.com/horse-racing/trainer-jockey-and-punters-in-shock-as-300-1-shot-lunar-fox-wins-australian-guineas-in-surreal-finish-at-flemington