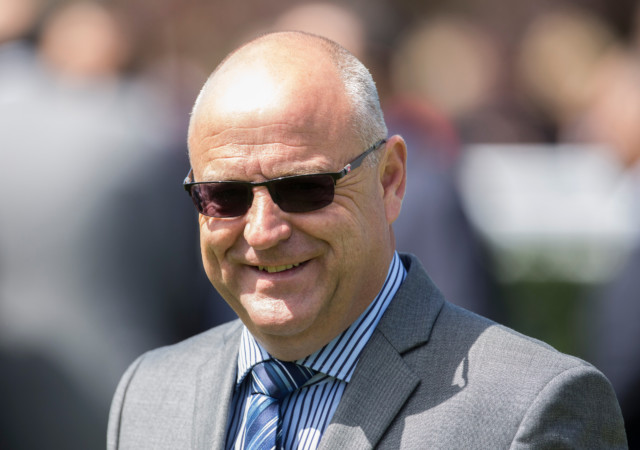 TRAINER Richard Fahey could give his Fev Rover another shot at Classic glory in the Irish 1000 Guineas.

His star filly was yesterday confirmed for Sunday’s Group 1 at the Curragh.

She was last seen when third to Mother Earth at Newmarket in the English equivalent and Fahey thinks the switch of track will see her improve again.

He said: “We expected a big run last time, I’m not going to lie.

“She’s done very well from two to three so we went there hoping for a nice run and had there been more pace on I think we would have been even closer.

“We had to ride her a bit differently than we wanted, so I think the Curragh will suit her a bit better, there’s a bit more emphasis on stamina.”

A bargain buy at just £20,000, Fev Rover was a Group 2 winner at two and Fahey hopes she can go one better this year for owners Nick Bradley Racing.

She was one of 18 left in at Monday’s entry stage with Aidan O’Brien’s Joan Of Arc and Joseph O’Brien’s Pretty Gorgeous other headline acts.

Fahey added: “We’ll have to take on all the big guns, but it’s a Guineas, it’s a big challenge.

“But we’re very happy with her and you’d like to think we’d go there with a big shout so long as she’s okay over the next few days.

“With all the requirements it’s not worth going if she’s not 100% so we have to leave it as late as possible.”

Fahey is also set for an important weekend on home turf.

He said: “We were disappointed with her run in the Fred Darling at Newbury.

“She just pinged the gates and she was set alight. We’ll drop back to six for now, she could go back up to seven at some point.

“She’s in the Listed Cecil Frail on Friday and the Sandy Lane on Saturday at Haydock.

“We’ll see what the fields are looking like but she’d have to carry a penalty in the Listed race and the ground could be bottomless given the forecast.”