Risk of ALL Saturday racing on ITV being called off as only Lingfield left – Newbury, Warwick and Chelmsford all off
Advertisement 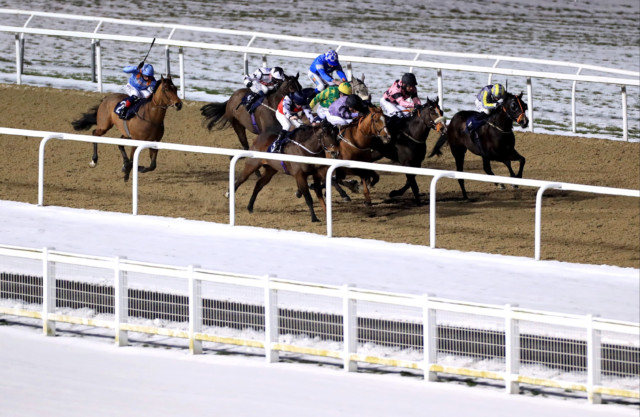 ALL afternoon racing could be lost on Saturday as Chelmsford was the latest to be called off due to freezing temperatures.

Only Lingfield is still to survive, but they must pass an early 8am inspection tomorrow morning.

Newcastle managed to race earlier in the week despite heavy snow

Wolverhampton is still scheduled to race, with their opener off at 4.45.

But the high-profile cards at Newbury and Warwick – both originally scheduled for tomorrow – have been moved.

The course failed an inspection this morning with the track frozen and no sign of improvement.

Warwick’s card that features the Kingmaker Novice Chase has been moved to Monday.

Lingfield could be the only afternoon racing in Britain.

But because of a forecast for a ‘prolonged & severe frost forecast overnight’ still needs to get the green light tomorrow morning.

Even in Ireland racing is at risk. The fixture at Naas has called an inspection for 7.30am on Saturday morning due to snow and ice.

Trainers have praised the calls to move Newbury and Warwick back to next week.

But it’s still unclear whether star attraction Altior will now be aimed at the Game Spirit at Newbury.

His handler Nicky Henderson is expected to decide early next week.