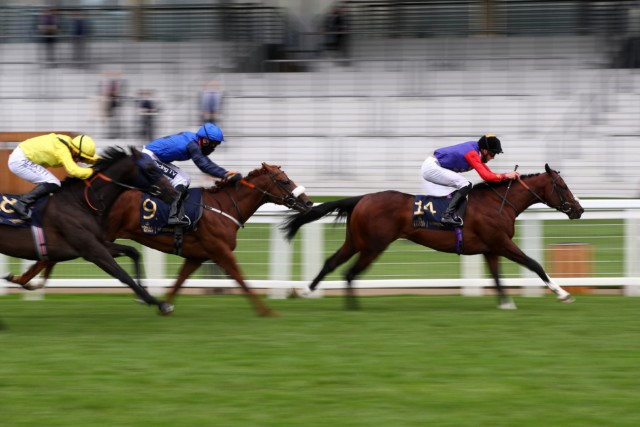 HATS off for the Queen!

Forced to watch on from Windsor Castle, her Majesty was treated to a Royal winner by her horse Tactical who continued trainer Andrew Balding’s hot-streak.

Always travelling well, he cruised into contention and passed Phil Makin’s Muker under the shadows of the empty grandstand.

Whether the Queen chose to watch on Sky Sports or ITV is to be debated, but you just know she would have had a smile on her face despite being forced to miss her first Royal Meeting in her 68-year reign.

And punters had reason to cheer too, with the horse popular in the betting – backed from 7-1 into the 7-2 favourite.

Tactical burrows up the rail to win the Windsor Castle – you don’t want to be away from that golden highway!pic.twitter.com/C5unUh1sOa

Doyle said: “It’s what dreams are made of. It’s what we all want.

“I was here when Estimate won and that was an amazing day. We don’t have the same today unfortunately, but I hope her Majesty enjoyed watching on.

“The race worked out nicely. My only worry was being drawn in 20 that we may have got a few traffic problems, but as it worked out it was perfect.

He jumped out brilliantly from the stalls and was very professional throughout.”

Coral’s David Stevens said: “A Royal winner at Royal Ascot is always popular with racing fans, and although not even Her Majesty could be in attendance at the course this year, her Tactical was one of the best backed horses of the day, from 6-1 into 7-2.

“And punters never had much to worry about as James Doyle steered Tactical home to cheers up and down the country, and no doubt at Windsor Castle too.”