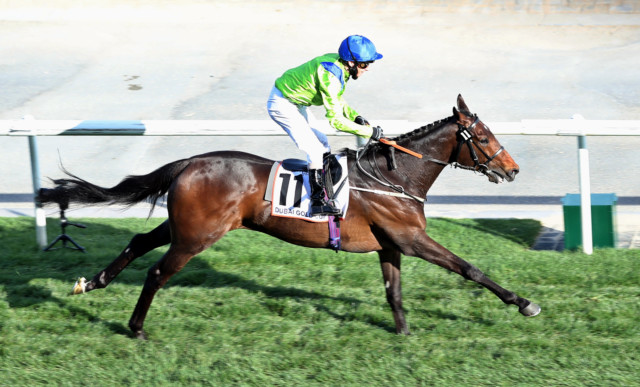 The Mark Johnston-trained runner – 11-2 for the showpiece contest – fell over and ‘skinned both knees’ on the gallops.

Fortunately, it turned out to be only superficial damage and the horse, who was bred by Barry and Susan Hearn, has since recovered well.

Johnston told Sky Sports Racing:”We had a scare on Friday, he fell over and skinned both knees and his hocks but just superficial grazes.

“It happened on the way to the gallops.

“Obviously it was a big scare because it was him.

“There was no swelling and he cantered both yesterday and today, so all should be well.”

However, Subjectivist is not totally out of the woods yet.

Johnston admitted he is concerned about a lack of a recent run for one of his stable stars.

Subjectivist has not raced since winning the Dubai World Cup at Meydan in March.

Johnston admitted: “That is more of a concern because of the time he’s had in between, but he’d had a fair bit of time of before he went to Dubai and clearly thrived on it.

“If he can repeat that performance, then Stradivarius is going to have to pull it all out to beat him.”

Stradivarius is 5-6 favourite to win the race for a fourth time.

Did you miss our previous article…
https://www.sportingexcitement.com/horse-racing/jockey-phil-dennis-reveals-his-lung-is-slowly-collapsing-after-fall-as-he-lies-in-hospital-200-miles-from-loved-ones