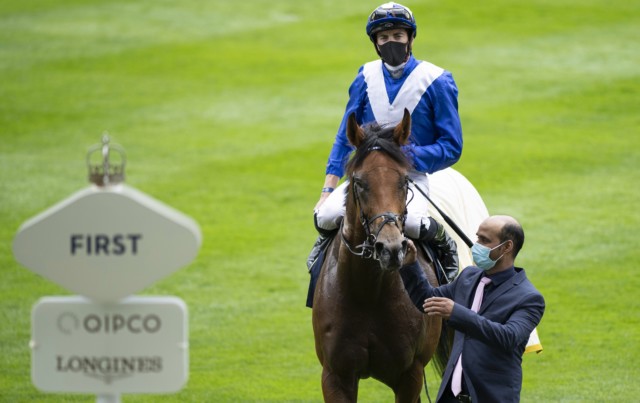 JOHN Gosden was king of the castle once again as Lord North (5-1) shone in the Prince Of Wales’s Stakes.

Frankie Dettori – who picked stablemate Mehdaayih – got it wrong for once, as stand-in James Doyle was left to laud it and stayed on best to win by three-and-three-quarter lengths.

Off a firm pace Doyle pulled the four-year-old out from the rail and kicked clear with ease.

It was a marked improvement from the horse who was beat off 98 in an Ascot handicap last season.

Addeybb plugged on for a creditable second, with hot-favourite Japan nowhere after missing the break.

John Gosden, winning his second race of the week, kept his future plans close to his chest post-race despite bookies making him as short as 4-1 for the Coral Eclipse.

How much of a good thing was he off 98 in that Cambridgeshire!

Doyle said: “I think when John takes a horse into a race like this you do have to prick your ears, and he was quite unexposed.

“He’s gone through the grades. He won the Brigadier Gerard at Haydock but looked to get a bit tired and John said he’d definitely improve a lot for that run. I thought going into it the vibes were all pretty confident from Mr Gosden’s camp.

“I guess it played into my hands the way the race panned out, but I felt it was a pretty evenly-run race, he settled beautifully out the back and showed a good turn of pace when I asked him, so it certainly wasn’t a fluke.

“I think he can continue now and be a pretty strong force in these type of races. A mile and a quarter is perfect for him.”