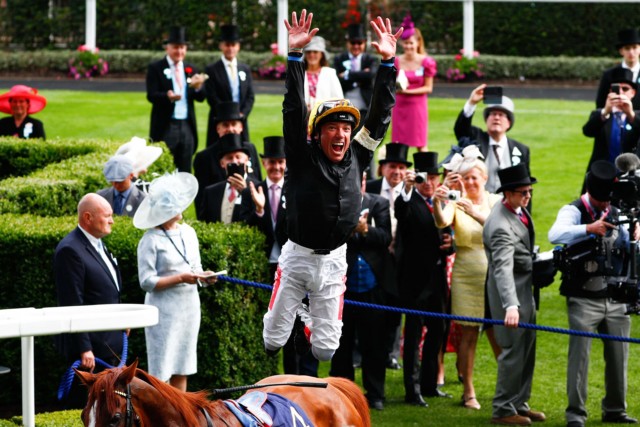 BRITAIN’S best tipster is raring to go for Royal Ascot.

He has revealed his pick for every race on day one of the star-studded meet – you can read them here.

Will Dettori dominate at Ascot again?

But he also produced a forensic analysis of every race for your viewing pleasure.

Read on to see the reasoning behind our man’s selections and who he thinks could run his picks close.

PALACE PIER is a winning machine who can bag another Group 1 prize under Frankie.

He took the St James’s Palace at last year’s meeting and did well to finish third in the QEII Stakes here in October when the ground was gluey and he lost a shoe.

He bounced back at Sandown before a convincing Lockinge victory at Newbury to kick off this season. He’s a short price but looks streets ahead of these rivals if anywhere near his best.

The quick ground is ideal for Order Of Australia who loved it like a road when winning at last year’s Breeders’ Cup in America. He wasn’t disgraced in the red-hot Hong Kong Mile last time out in December and has gone well fresh. He looks a good shout for the forecast spot.

Aidan O’Brien also runs Lope Y Fernandez who was third at Keeneland. The soft ground was against him in the Lockinge and he’ll do better here.

The rest look short of this level but Regal Reality was a fair third in the lesser Chesham Stakes here last year and has an each-way squeak. Lord Glitters is another who likes this track and went well enough at Newbury.

TOLSTOY battled well to win on debut at Yarmouth despite looking very green. Team Gosden usually introduce their better juveniles in that race and Frankie has picked him of their pair. There should be massive improvement today.

Stablemate Dhabab has a leading chance too after storming home at Leicester on debut. He was an expensive buy who will stay every yard.

Stamina is the doubt about favourite Kaufymaker. American trainer Wesley Ward does well with youngsters at this meeting but she won a modest enough race over 4f and has to prove she gets this far. If she does it will be hard to catch her but it’s a big if.

Gisburn caught the eye when winning easily at Newbury last time. The ground was soft there but he’ll be a threat if improving for this quicker surface.

Ebro River has the best form on show thanks to his Listed success at Sandown last month. He’s another who has done his winning with ease in the ground but should handle it faster. He could make his experience count.

The Acropolis saw out this trip well when scoring for Aidan O’Brien at Listowel and is respected.

Son Donnacha sends over Curragh Group 3 second Masseto with valid place claims. He was green on that second run and can show more.

BATTAASH won this race in style last year and can follow up. Simply put, his best form is miles clear of anything in the field, he likes this trip and the ground will suit. The only worry is the injury he picked up over the winter but connections say he’s back to his old self. His B-game would be enough to land this prize.

Winter Power is the horse in the field with the most scope to improve. She won a York Listed race eased down on comeback on top of impressive form as a two-year-old that saw her land a Group 3 contest at Newmarket.

Liberty Beach was no match for Battaash 12 months ago but was a good third and scored cosily at Haydock last time. She wouldn’t want the ground to get any faster.

Oxted is a proven Group 1 performer so warrants respect and Ascot’s slightly uphill finish will play to his strengths. He has place claims.

Of the bigger prices, Arecibo clocked a good time when winning a hot handicap at Newmarket last month. This is clearly tougher and he comes from behind but, if he gets the breaks, he can hit the places under hold-up king Jamie Spencer.

Ubettabelieveit needed his comeback in France and will love these conditions.

POETIC FLARE won the 2,000 Guineas on fast ground and can strike again in similar conditions. He has run well twice since that Classic success in the Irish and French versions. He loves this mile and canny trainer Jim Bolger reports him in rude health ahead of his fifth run of the season.

Lucky Vega has chased the tip home twice and can hit the frame with quick going ideal for him too. He may end being best just short of this trip.

Mostahdaf got the better of Highland Avenue in the Sandown Classic Trial and looks capable of improving here. He relished the mud that day but is bred to handle this ground too.

William Buick will fancy his chances of turning the form around though and his mount is proven in these conditions after a Newmarket Listed win.

Battleground was a well-backed flop in the Guineas and is surely better than his poor effort at HQ. This easier track could be the making of him and Aidan O’Brien does well in this race.

Frankie takes over on Thunder Moon who is another bidding to come back from a poor Guineas run. He was a Group 1 performer last season but may like it a bit softer.

Chindit got no luck at Newmarket after winning at Newbury on comeback. He won here last season and could be a solid each-way bet for Richard Hannon.

Wembley has been poor in both Guineas this season and may need further.

RAYAPOUR can take this for world-class jumps trainer Willie Mullins. He has decent form on the level in France, including a second at Listed level. He came back from almost two years off to run well over timber on debut for the yard last time. That should have sorted out his fitness and he can make a bold bid under Adam Kirby.

Mullins also runs MC Muldoon who is presumably the pick of Ryan Moore. He is a Graded performer over timber and showed something on the Flat for Peter Chapple-Hyam. Given the yard have won this four times since 2012 he should go close too.

Just Hubert shaped well when third in the mud at Haydock last month. He finished off well over two miles and won at Glorious Goodwood over this trip last season. He’s only 4lb higher today and should be right there again.

Elysian Flame got too far behind at Chester last time before running on to finish fifth. He’s another who stays forever and is capable of hitting the frame at a decent price.

Golden Rules is interesting for Frankie and Johnny Gosden. He has few miles on the clock and showed promise when fourth at Newmarket over 1m6f latest. He has scope to build on that from what could be a lenient mark.

FELIX ran a cracker when third behind Lord North in a Dubai Group 1 last time. He was finishing like a train over the 1m1f trip so should appreciate this longer trip.

Oisin Murphy just needs to make sure he doesn’t get too far behind.

Patrick Sarsfield is consistent and went close in a Curragh Listed contest on comeback. He’s a proven stayer who can go close although this will be the liveliest ground he’s tackled.

Solid Stone got a good ride from Ryan Moore when winning at Windsor last month. He wasn’t stopping at the end of that mile and has no stamina issues.

Forest Of Dean finished ahead of the tip when they clashed in the Winter Derby on the AW at Lingfield. He got the run of the race that day but he likes it firm on turf as he showed when scoring at Glorious Goodwood in 2019 before missing 16 months. He’s been kept to the sand since then so it will be interesting to see how he fares here.

Blue Cup won easily at Epsom on soft 11 days ago and isn’t ruled out in very different conditions.

DUBIOUS AFFAIR looks a big price given her best form has come over this trip. She was a close-up fourth in a Group 2 at Donny and won a decent Newbury handicap. She found the high-class field and soft ground against her here in October but this is more her level and she goes well fresh.

Saldier is a quality hurdler who came back to the level after four years for an easy Listowel win nine days ago. He stays forever and has a big chance under a penalty.

On To Victory went close over an inadequate 1m4f at Goodwood last month when the tricky track didn’t suit. Trainer Alan King is no stranger to Royal Ascot success.

Throne Hall ran well over shorter at Ascot and should relish this longer trip. He rarely finishes out of the frame and looks a solid each-way bet.

Global Storm landed a cosy win at Newmarket last month and is a proper stayer who should run well again.

Sleeping Lion saw out 2m strongly on the AW and went close on his last run here when 6lb lower.