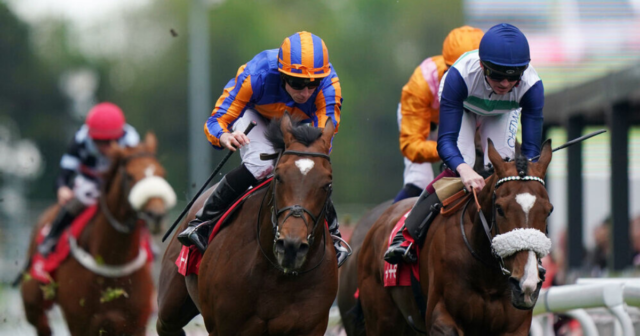 IT was high fives all round for Aidan O’Brien as he finally won his first Chester Cup with Cleveland.

All week O’Brien and Ryan Moore have been the pair to beat on the Roodee and that rolled on to Friday as O’Brien notched a brilliant fifth victory of the meeting.

For Moore it was an incredible EIGHTH win from just 11 outings at Chester and he heads to Lingfield today with another strong book of rides.

Moore said: “It’s been a good week. The horses have been running great, they have been all year in fairness, and there’s a lot to look forward to hopefully.”

Well-backed Cleveland cruised through the two and a quarter mile race and daring Moore took a brave line on the inside turning into the straight with five still to pass.

Cleveland responded well and finished best to pick up the stragglers and land some lumpy bets as he returned at just 6-1 having been 8-1 overnight.

Aidan O'Brien and Ryan Moore have been unstoppable this week!

Andrew Balding’s Coltrane was second with Rajinksy back in third for Hugo Palmer.

Bigger things now await the four-year-old who is entered in the Gold Cup at Ascot. Betfair were impressed and trimmed him to 10-1 from 66-1 for that.

Moore added: “He made a nice enough comeback over ten furlongs, but the quicker ground today would have helped.

“He was still a little bit of a baby going around there, but he hasn’t had many runs.

“We didn’t have a lot of room, but he was able to pick his way through.

“I always felt like I was going to win if I could find the right gaps and get enough space.

“Maybe it wasn’t the best Chester Cup ever run, but I’m delighted to have won!”

O’Brien is in red-hot form and sends out United Nations and Emily Dickinson in tomorrow’s Lingfield Derby and Oaks trials.

He said: “We’re delighted with that week.

“We liked Cleveland a lot at two but then he got a little setback which kept him off the track for a while.

“We were thrilled with his first run back at Naas and we were always sure he’d make up into a middle-distance horse, if not further.

“The decision we had to make was whether he ran in this or the Ormonde, but we just thought he would learn more if he ran in the Chester Cup and we weren’t sure he was ready for a race like the Ormonde. Ryan gave him a beautiful ride.

“He’s in a lot of big races as we were still learning about him when we had to make the entries. We’ll decide nearer the time which one suits him best.”

In this article:allround, ashe, itwas