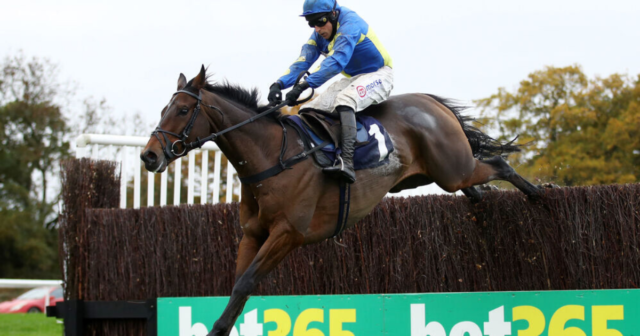 DAN SKELTON was left feeling Blue as he was forced to rule out one of his stars until the spring.

His Shan Blue was set to win the Charlie Hall at Wetherby before a horror fall three fences from home.

An update on Shan Blue. You’ll see him in the spring pic.twitter.com/hSxi4tunbd

The trainer fiercely defended his brother and jockey Harry Skelton after he was criticised by some punters after the incident.

Fusil Raffles went on to win the big early season staying chase, but Skelton was dealt a bigger blow on Tuesday when he was forced to rule his star out of the Ladbrokes Trophy at Newbury and the huge Grade 1 King George at Kempton.

The Alcester handler said: “He was obviously going to win the Charlie Hall when he fell. We’ve given him a full check over and he is a bit stiff in his neck.

“Speaking to the vets and his owner, we’ve decided we’re going to back off for a month completely to get all the soreness out of his neck.

“You can stroke him and pat him, he’s not horrendously sore, but he’s just a little bit sore to flex, so we’re going to give him the time that he needs.

“We’ll back off him completely for a month and restart. It does mean that he’ll miss the Ladbrokes Trophy and the King George, but he’s a young horse so we’ve got to do the right thing by him.”

He added: “He’s not an old horse and you can see him having a long career over fences and we want him to be 100 per cent right when we go, so we’ll back off him now and have him ready for the spring, Cheltenham and Aintree.

“We don’t want to be in that position with any horse, but when you have a horse of this calibre you just cannot chase it, so we’ll give him the time he needs, get him 100 per cent right and you’ll see him in the spring.”

After impressing at Wetherby, Shan Blue was well-backed to make amends in the Ladbrokes Trophy at Newbury on 28 November.

He was punted into the 6-1 favourite but after being ruled out, Enrilo is the new 7-1 market leader for Paul Nicholls.

Stablemate Next Destination is next in at 8-1 with Ontheropes the same price.