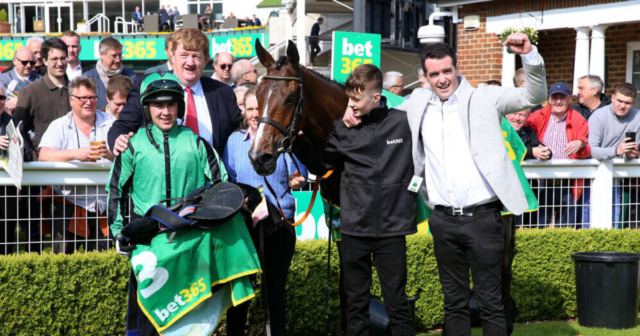 LIKE a scene out of Jaws, the unsuspecting Brits never saw the Shark coming.

With Willie Mullins and Gordon Elliott fixing their sights on Punchestown, our top trainers probably thought it was safe to go back in the water.

But they were in for a nasty shock as John ‘Shark’ Hanlon’s 16-1 shot Hewick picked them off one-by-one to win the Bet365 Gold Cup.

The result proved a lifesaver for the bookies, as the defeat of Paul Nicholls’ well-backed Enrilo meant they avoided a total bloodbath, despite the champion trainer’s stunning 410-1 five-timer.

For County Carlow-based Shark, who was given the nickname as a teen as he towered over all the other kids on his hurling team, this was a well-executed, long-term plan.

Hewick had been laid out for Sandown’s £160,000 feature, and the way he travelled through the race under rising star Jordan Gainford suggested he was ready for his life.

The field had thinned out by the time they reached the third last, with the majority of the runners feeling the pinch at the business-end of a strongly-run 3m5f.

But Hewick was still full of running, and while the brave Kitty’s Light tried to mount a challenge between the final two fences he was never able to land a glove on the winner.

The celebrations will no doubt have lasted long into the night, with Hanlon joking: “The plan was to go home tonight, but the plan has just changed!”

The larger-than-life trainer, who was responsible for giving Rachael Blackmore her big break, is making a habit of winning big pots with horses out of the bargain basement.

Last season he won a Grade 1 hurdle with £600 buy Skyace, and he bought the exciting Hewick for just £700.

Hanlon grinned: “He cost the same as a cow!

“It’s great, we were probably a bit unfortunate at Uttoxeter in the Midlands National when he was virtually carried out and Jordan pulled him up.

“He said he was sorry as he thought we’d have won and I replied ‘don’t worry, we’ll win at Sandown’, and this is a race we’ve had in mind for a long time.

“He will have plenty of weight wherever he goes next, but he loves decent ground and he stays well, so maybe he will be a Grand National horse.

“He was bouncing around the ring, I have never seen him so well, so I went and had a few quid on him.

“We love to go home with the Queen’s money!”

It wasn’t a bad day at the office for 13-time champion trainer Nicholls, either, as he headed back home to Somerset with five wins and another trainer’s crown in the bag.

His big-race acca was headlined by the impressive Greaneteen (11-8), who bolted up in the Grade 1 Celebration Chase.

Nicholls said: “It’s a great way to end the season, there is good prize-money here and the horses liked the ground.

“It’s been another good year for us, we have won plenty of big races, even though we had the little dip in form in the middle of the winter.

“Greaneteen looked like a proper horse today. He doesn’t get the credit he deserves.

“He has won a Tingle Creek and two of these now. On his day he is very good, he wasn’t beaten far in last year’s Champion Chase. That was awesome.

“It’s great to get a win into these horses, they are all talented and they have just had one or two things not go right this year.”

Nicholls is now within two of Martin Pipe’s record 15 trainers’ titles, and he is showing no signs of slowing down.

He added: “If you win the championship, like a football team winning the Premier League, you want to win it again.

“It’s great for the whole team, it is our aim every season, to keep the title. Once you get the taste you don’t want to stop – and we aren’t planning on stopping.”

Advertisement. Scroll to continue reading.
In this article:goback, itwas, williemullins