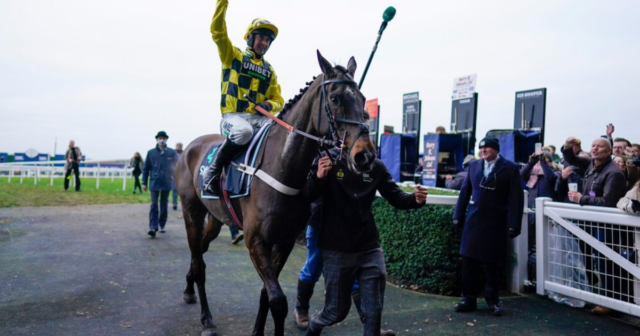 RARELY do these blockbuster clashes live up to the billing, but this got the full five stars.

A Clarence House Chase for the ages somehow went the way of super Shishkin who denied Energumene in an all-action thriller.

The big names all played their part, none more so than jockey Nico De Boinville who had one final act to play on Shishkin after the last fence.

Like all true greats do, Shishkin found an extra gear when it mattered to reel in the long-time leader and nick it by a length.

Weeks of build-up and tension, failed ferry strikes and anxious mornings on the gallops and the best in Britain and the best in Ireland could only be split by the narrowest of margins.

“This was the battle, not the war,” said a relieved Nicky Henderson. “We all know where round two will be, and that will be for the championship.”

Energumene and his ever-gracious trainer Willie Mullins both emerged with huge amounts of credit. It’s funny what happens when two big guns are happy to take each other on outside of the Festivals.

The runner-up was treated to a brilliant ovation not heard for most winners as he trudged back into the paddock.

Mullins said: “That was one of the best races I’ve ever been involved with. I was shaking in the stands as the horses passed the post, that was terrific.

“Two good jockeys, two good horses and it went down to the wire. We jumped well today and had our way, so it will be tough for us to turn it around but we’ll have another go. Cheltenham is the only way we can go.”

Pure, unadulterated equine entertainment you just couldn't take your eyes off for a second

The loudest cheer of the afternoon was saved for Shishkin and De Boinville who punched the air as he entered the winners’ enclosure.

‘Oooo Nico De Boinville’ came from the crowds and after the pummeling the British took at last year’s Cheltenham Festival, this rare ‘home’ victory was celebrated by most of the 10,000 in attendance.

Not as fluent as he can be, Shishkin made hard work of it, landing horribly after the sixth and blundering at another couple of fences.

But chasing a flat out Energumene has done for most and god-willing this rivalry could light up the sport for a couple more years yet.

Henderson said: “That was special. I hoped it delivered as I owe this sport a lot, and it did – we put on a show.

“I was nervous, but Willie and I are great mates. We had lunch before and our wives Sophie and Jackie have been speaking since quarter to seven this morning!

“Jackie said Willie was late for his plane and might not make it over, I said I’m not bothered about the plane I wanted the ferry not to make it over!”

Henderson’s lunch was interrupted as Supreme hope Jonbon slogged to a win up at Haydock in the Rossington Main, but that was no more than a warm-up for what came later.

The trainer added: “Nico said that gave him the best buzz of his life and that says something when you have ridden a couple of Gold Cup winners.

“Two out I thought we were dead, that might be the wrong word but you know what I mean. He was running back at the last, but I was never confident.

“Sprinter Sacre and Altior were fantastic, but the horse in second today was probably as good as any competitor they had to take on.

“It was a great weekend for racing, and it did come off, even if everyone thought one of us wouldn’t turn up!”