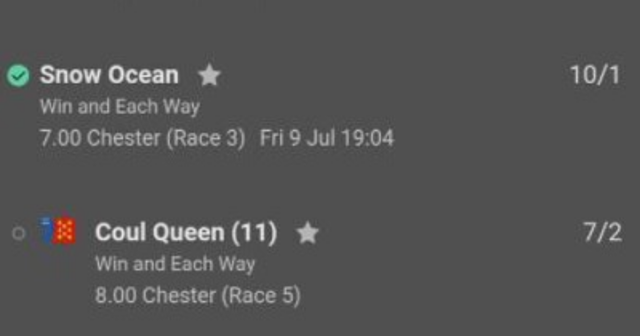 A SHREWD punter won £9,000 in just over an hour by backing the same four horses over and over again.

And in a remarkable coincidence, the bettor went with the horses because they were all under the same trainer.

The punter backed the same four horses over and over in the brilliant bet which brought in £9,000

None of the runners ever went shorter than 7-2 and the biggest won at 10-1.

The punter posted his winning betslips online after striking gold in races at Chepstow and Chester last Friday.

In a mixture of different bets, the bettor plumped for Winklevi, Almost An Angel, Snow Ocean and Coul Queen, all trained by David Evans.

Snow Ocean was the first to oblige at 10-1 when winning the Class 2 Boodles Raindance Handicap at Chester by a short head from 50-1 shot It’s Good To Laugh.

Cam Hardie looked to have too much to do 100 yards from the post but the five-year-old gelding found an amazing turn of foot to scoop the £15,642 price for connections.

Almost An Angel struck 15 minutes later at Chepstow at 801, holding off 7-2 Luxy Lou to claim the Class 5 handicap over seven furlongs.

Coul Queen at 7-2 gave Evans his sixth winner from seven runs by landing the Boodles Ashoka Handicap over seven furlongs at Chester.

And it meant the punter’s bet rolled over to the last selection, with Winklevi landing the giant jackpot after winning the 8.15 at Chepstow at 8-1.

The punter said had they let all of their bets run as they were they would have netted £16,000.

Fellow bettors were loving the gamble, with one praising the ‘monster bet’.

Genius punter Paul Dean famously did a partial cash out for £250,000 at this year’s Cheltenham Festival as well.

That proved smart as Envoi Allen, the final horse in his selection, fell when 4-9 favourite in the Marsh Novices’ Chase.

Evans has been in red-hot form lately and looks to have a superstar on his hands in Rohaan.

The horse is co-owned by Crystal Palace star James Tomkins, who says the runner’s rapid rise reminds him of Jamie Vardy.

Did you miss our previous article…
https://www.sportingexcitement.com/horse-racing/frankie-dettoris-famous-flying-dismount-strikes-fear-in-daughter-ella-who-vows-not-to-repeat-antics-at-magnolia-cup