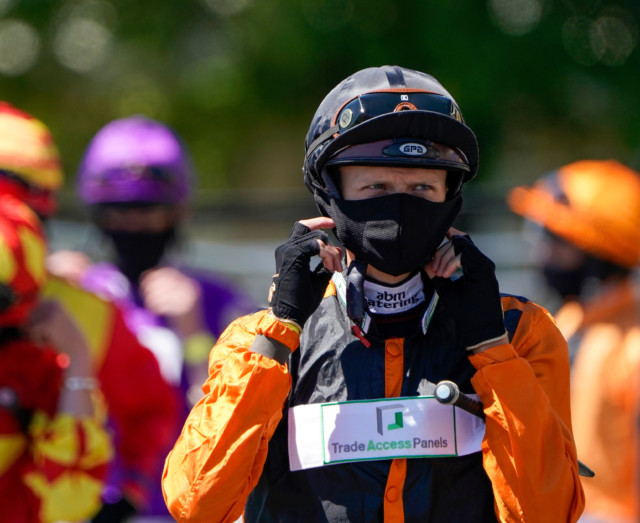 JOCKEY Alistair Rawlinson is set for a spell on the sidelines after a horror fall at Windsor on Monday.

The rider needed medical attention for 45 minutes down on the course where his horse Diligent Lady came to grief.

Rawlinson has ridden 15 winners so far this year

Medics took no risks as he complained of pain in the neck and back but thankfully he avoided any serious injury there.

On Tuesday his boss Mick Appleby said he had broken four ribs and his ankle and that he had a hip like a ‘balloon.’

Diligent Lady – trained by Michael Attwater – had to be put down.

However, George Buckell, the other rider brought down in the incident avoided serious injury and hopes to be back in action this week despite also needing to go to hospital.

Appleby said: “I’ve spoken to him. He’s broken his ankle and he’s got four broken ribs. His hip is swollen and sore but he was quite lucky. It looked a bad fall.

“I think he has to have an operation on his ankle to have some metalwork in it.

“He’ll be off for quite some time, I would think.”

Buckell appears to have escaped serious injury and is looking to be back in the saddle later this week.

“George is absolutely fine. He has a small bit of pain in his neck but X-rays were clear,” said his agent, Simon Dodds.

“He’s going to Oaksey House for some physio. He’s hoping to be back in action this week if he passes his medical.

“He wishes Ali all the best and hope he is OK.”

Did you miss our previous article…
https://www.sportingexcitement.com/horse-racing/when-is-royal-ascot-2021-dates-race-schedule-and-odds-for-the-royal-festival