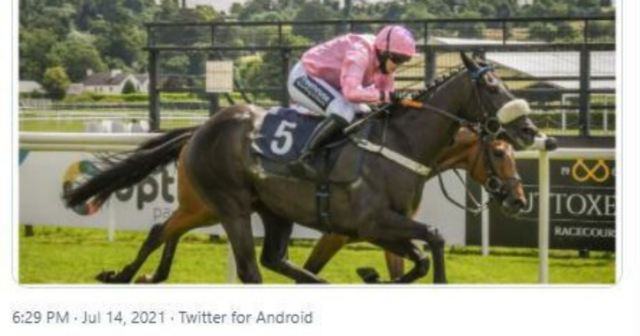 SISTER jockeys Abbie and Ella McCain landed an amazing 132-1 double after both winning on their only rides of the day.

The McCain girls are daughters of top trainer Donald, who is the son of famed Red Rum trainer Ginger.

Racing clearly runs in the family but even they were shocked to pull off the outrageous double on horses their old man trains.

Abbie, 21, won on Zafar at Uttoxeter – a horse owned by mum Sian – before Ella, 20, sprung a big surprise on 18-1 Russco 30 miles down the road at Wolverhampton.

The girls have previously said about seeing jokes about dad Donald raising his stud fees.

But the Grand National-winning trainer felt nothing but pride at seeing his two girls triumph at monster odds.

“A very proud day for both myself and @horsey03,chuffed!!#welldonegirls.”

Ella told the Racing Post: “It can take a bit to get dad delighted, but he definitely was yesterday.

“Neither horse was going there with a big chance, but it worked out well and it was nice to see them win.”

Ella’s win came in her best season yet, with 11 wins in 65 rides as apprentice to Tim Easterby.

The girls were destined for the top after riding out on 2004 Grand National winner Amberleigh House as children.

Ella won her first ever race in 2017, with Abbie trailing behind.

She joked she thought ‘jammy git’ as her sister bolted past the post in front of her.

Meet sisters Abbie and Ella McCain who are making a name for themselves as jockeys. They are the daughters of trainer Donald McCain and granddaughters of the late, great Ginger McCain. Mike Hall spent the day at the family's Cheshire stables. pic.twitter.com/0z2yABHj6x

But it turns out the duo enjoy a bit of banter in the stalls beforehand if they are in the same race.

Abbie added: “But we do try to look after each other as well as stay competitive.

“We never get bitter if the other one has a winner. We’d rather be beaten by each other than other people.”

But no one got the better of them on Wednesday.