Son of a greengrocer who ran on the track when his horse won at Royal Ascot takes on billionaires in £300,000 Dewhurst
Advertisement 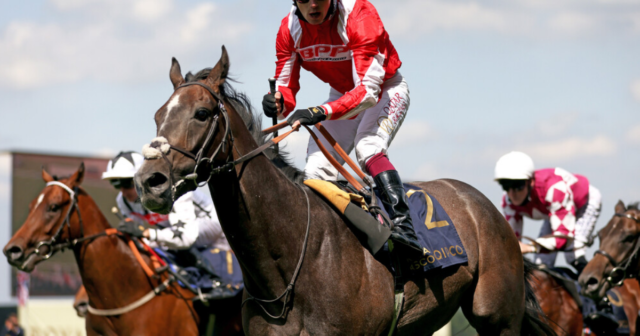 AS a young lad, Paul Spickett made a promise he’d buy himself a racehorse before he was 50.

He managed it, but only just.

You’ve probably seen the string of Berkshire horses running for Andrew Balding over the past few years and wondered, ‘what’s that name all about?’

After 22 years of hard graft, Spickett finally treated himself to his first horse in 2013 and has already tasted success at Royal Ascot, with a St Leger runner-up thrown in for good measure.

Spickett has come a long way from his working-class roots in London where he first grew up, even if he hasn’t lost all the cockney twang just yet.

He said: “My love for the horses started when I moved to Lambourn from London as a young lad. Even back then the sport excited me.

“I promised myself then I’d try and buy a horse one day, hopefully before I was 50, and I just about did it!

“My mum and dad wanted to get out of the smoke and get out to the country. I still to this day don’t know how they discovered Lambourn as it wasn’t really on anyone’s radar back in the seventies!

“We were in Twickenham before that, my dad owned a greengrocer. But they changed when we got to Lambourn and my dad started welding, he was doing the tractor cabs in the village.

“He also managed the British Legion in the village, we lived two doors down. Those were the good old days and I remember listening to races in there on the radio.

“All sorts of people from the racing world would pop in. If Snowy ever came in, who used to be the head lad for Barry Hills, he would put you on to one. If he ever gave you a tip my dad would make sure he backed it alright.

“That was when I fell in love with the game. It became my dream to own a racehorse but I knew I’d have to be successful to do that, and thankfully the business has grown enough.

“The company has been going over 20 years now and it’s been the catapult to be able to buy a few horses. It’s why they all carry the same name and then the colours are from the company too.”

There’s nothing wrong with a bit of free advertising and Spickett’s newest star, Berkshire Shadow, has already taken the name to the biggest stage of all at Royal Ascot.

He took home the Coventry Stakes under champion jockey Oisin Murphy, with the pair to be reunited in today’s Group 1 Dewhurst at Newmarket.

Spickett said: “Royal Ascot was absolutely mad, it was just a mad day. I just couldn’t believe it at the time.

“To just have a runner at Royal Ascot was unbelievable and to get a win was… well, I still can’t describe it.

“I didn’t watch the last half a furlong as I was running along the side after the horse and soon ended up on the track. It might not have been what I was supposed to do but they let me off!

“I couldn’t have asked for any more, it was magical. I was with my wife who we bought the horse for as she loves greys. It was a cheeky purchase we made up at Tattersalls and he was missed by all the usual faces.”

Spickett’s wheeler-dealer background has helped him bag some bargains in the sales ring. With the help of the Balding family, he snapped up both Berkshire Rocco and Berkshire Shadow for less than £50,000.

Now that’s not money you find down the back of your sofa, but in this game that’s pocket change to the big players.

Spickett said: “The horses we get aren’t the most expensive and it makes it even more special. The big names have all the money in the world, you know.

“But Andrew is very good at spotting a horse and he makes sure that we put the right limits on as believe me it’s very easy to get carried away otherwise.

“We went and bought our first horses with Emma Balding in tow, Andrew’s mum. She showed me the ropes and you can’t go too far wrong with that family in your corner.

“I’m just a working-class boy and they took me on board as I am and it’s been fantastic. The minute I stepped foot in their old kitchen I just knew I was in the right place.

“They’ve had a phenomenal year and I hope they can win the trainers’ title, they deserve it. I hope the Berkshires can run their best and help out that cause.”

Spickett’s Ascot ace Berkshire Shadow will test his mettle in the Dewhurst this afternoon with Berkshire Rebel running in the Zetland (1.45) earlier on the card.

The son of a one-time greengrocer will be taking on the likes of Coolmore and Godolphin at the home of horse racing and he’s loving every minute.

Oisin Murphy punches the air as he crosses the line

He said: “I’m really looking forward to today. To have a horse in a Group 1 is ridiculous, I never thought we’d have a shot at one.

“I do have to pinch myself when I’m in the parade ring and the people, the famous owners and what not are all around you wherever you look. It’s crazy, I look at my wife and we just laugh.

“We’re taking all the family this weekend including my little granddaughter Athelia, she’s only three but already loves her racing.

“We’re staying up there for the weekend and then going to the sales to look at some more horses and keep the dream going for another year at least!”

This game needs characters and in Spickett it’s found another one. Long live Berkshire Parts and Panels.