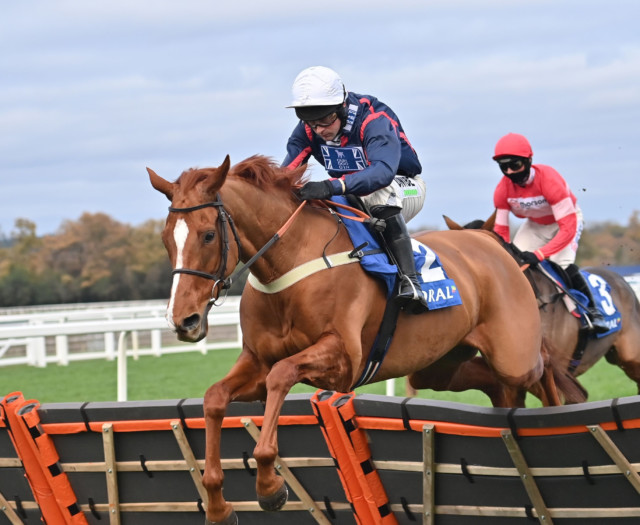 SONG FOR SOMEONE never got his day out at the Cheltenham Festival.

Tom Symonds’ star missed the Champion Hurdle with his owner Sir Peter Gibbings ‘nearing the end of his life.’

The family felt running the horse was simply not the right thing to do. As it turned out, beating Honeysuckle may have proved impossible anyway.

And with Sir Peter slowly, but steadily on the mend, Song For Someone and Symonds could yet break their Grade 1 duck on the big stage.

The six-year-old lines up in the Aintree Hurdle this afternoon already with a hat-trick of Grade 2s on his CV.

A first top-level success is memorable to anyone, but it would be extra special given Sir Peter’s health battle.

“Cheltenham was just a time to leave them to themselves and let them have their privacy. And to be honest we made clear at the time that Cheltenham wasn’t the be all and end all anyway.

“What happened took the decision out of our hands anyway and it may well pay off now at Aintree.

“We’d love to win a race like this with the horse for them, they’ve been loyal to us and great supporters.”

Symonds was named an assistant to powerhouse trainer Nicky Henderson at only 21 and took out his own licence just five years later.

Ten years down the line and the Herefordshire trainer is enjoying his best season to date, with Song For Someone a real flag-bearer.

He continued: “For us to have a runner in a race like this is amazing, for a yard like ours.

“We’re already over the moon with what he’s achieved and very proud of him, but we know he has to step up again.

“There’s nothing in the race that’s completely outstanding, they’ve all got question marks to some extent. Some have had hard races, some have the ground a bit like us and it’ll be an interesting race.

“We all know Honeysuckle is the best horse in the division now, but thankfully she isn’t here!

“I’ve got some great memories of Aintree when I was with Nicky [Henderson].

“It’s thrilling to be here now ourselves, it’s a bit of a cliche, but it is a dream come true.

“We don’t take it lightly having a horse in a big race like this and in theory should be competitive.”

Song For Someone had been unbeaten this season until he was outgunned by Goshen in the Kingwell Hurdle.

His trainer has already moved on from that episode and expects a better showing this time around, over an extra half-mile.

Symonds said: “This is his first run in a Grade 1 open company race. Up until now he’s always had to give weight and penalties away in Grade 2s – this is a different test.

“We still don’t know what his best trip is!

“But given what he did at Ascot against Thomas Darby over two-and-a-half, when he was a younger horse and not so strong, you would have to think it would be right up his street.

“We’d like a bit more rain, but we know we go with a chance and I’d be lying if I said we weren’t all dreaming at the yard. It’s what we get into it for.”