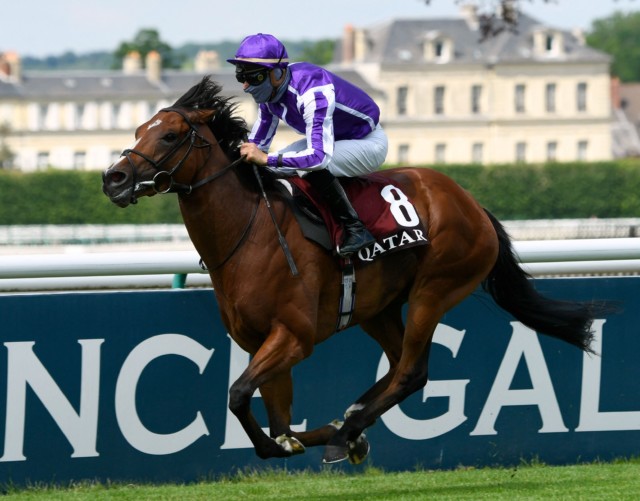 The top-class colt – who also bagged the French Guineas last month – was in a different league to the opposition as he gave O’Brien his first ever win in the prestigious race.

The son of Siyouni was sent off the well-backed 11-4 jolly – and favourite backers rarely had a moment’s doubt in the big one at Chantilly.

He was sharply away from his low draw and given a beautiful tow through the early stages of the race by 25-1 shot Normandy Bridge.

As that rival back-pedalled, he drifted off the rail allowing St Mark’s Basilica to breeze through under Ioritz Mendizabal – who has become something of a super-sub during the pandemic having also won last year’s renewal aboard John Gosden’s Mishriff.

St Mark’s Basilica quickened clear under hands and heels, even flashing his tail in the final strides when Mendizabal had the cheek to give him a flick with the whip, with 66-1 shot Sealiway edging out Millebosc (25-1) for second.

O’Brien said: “We were delighted with him. He was up a couple of furlongs in trip but he was very impressive.

“He relaxed very well and quickened well. He put the race to bed very quickly, very few horses can do that.

“Ioritz is a brilliant rider, he’s a great horseman. He rode for us at Deauville last year and we were impressed with him.

“When Frankie rode him last year in the Dewhurst he said the horse would stay a mile and a quarter, and Ioritz said the same thing after the French Guineas.

“He has a lot of pace and he is able to quicken, and that’s what makes very good horses and he has those qualities.”

St Mark’s Basilica’s price for the Coral-Eclipse collapsed following his win, with the big-race sponsors cutting him into 7-2 from 8-1, with only Mishriff (11-4) ahead of him in the betting.

Meanwhile, Betfair cut him into 7-1 from 16s for the Prix de l’Arc de Triomphe at Longchamp in October.

On staying further than 1m2f, OBrien said: “It’s a possibility but it would depend on which way the lads wanted to go with him – but he’s a very exciting horse.”

Advertisement. Scroll to continue reading.
In this article:Chantilly, Epsom, Longchamp