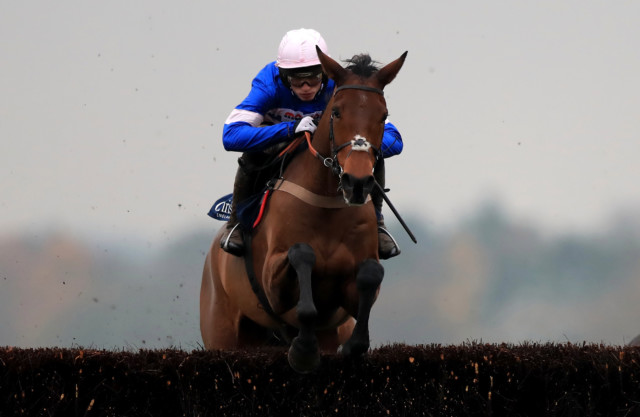 CYRNAME is one of 20 entries for the Charlie Hall Chase at Wetherby on Saturday.

The Paul Nicholls-trained eight-year-old is the highest-rated chaser in Britain, having beaten Altior at Ascot last November.

Cyrname is set to run at Wetherby on Saturday

He was then second in the King George VI Chase at Kempton on Boxing Day, before suffering a crunching fall in the Ascot Chase in February.

Nicholls was initially keen on the idea of sending Cyrname to Down Royal for this weekend’s Ladbrokes Champion Chase, but restrictions caused by the Covid-19 pandemic prompted a change of plan.

Cyrname has also been entered for Saturday’s Sodexo Gold Cup at Ascot, but he is widely expected to head up the A1 to Wetherby, where he could be joined by stable companion Black Corton.

The last two winners of the Charlie Hall in the Nigel Twiston-Davies-trained Ballyoptic and Brian Ellison’s Definitly Red are in the mix once again, while leading Irish trainer Gordon Elliott has a trio of contenders in Alpha Des Obeaux, Shattered Love and The Storyteller.

Lisnagar Oscar, a shock winner of the Stayers’ Hurdle at the Cheltenham Festival in March, could reappear in the bet365 Hurdle – better known as the West Yorkshire Hurdle.

Rebecca Curtis’ runner is one of 19 entries, with Paul Webber’s Indefatigable, Dan Skelton’s mare Roksana and the Philip Hobbs-trained Thyme Hill among his potential rivals.

Verdana Blue and Stormy Ireland, trained by Henderson and Nicholls respectively, could clash in the bet365 Mares’ Hurdle.

Did you miss our previous article…
https://www.sportingexcitement.com/horse-racing/fairytale-success-for-ann-hamilton-and-danny-mcmenamin-as-nuts-well-wins-the-old-roan-at-aintree