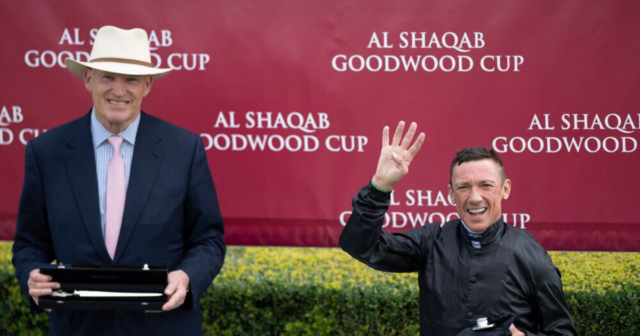 STRADIVARIUS has been pulled OUT of the Goodwood Cup.

John Gosden sounded the warning klaxon after the track was deluged with rain in recent days.

Stradivarius already has four Goodwood Cups to his name

And after the first race finished the master trainer decided the ground was too bad to run his star on.

The horse had been favourite during the build-up to win an incredible fifth Goodwood Cup.

But Alan King’s Trueshan was well-backed into 15-8 as the rain continued to pour.

Stradivarius tasted defeat in the Gold Cup at Ascot last time out and connections had hoped to set the record straight at Goodwood.

But after an overnight deluge saw the ground turn to heavy, soft in places and after assessing conditions following the first race on the Downs won by Migration, Stradivarius’ handlers opted not to run.

Gosden said: “It’s difficult as we’re trying to do something that’s never been done before and win five Goodwood Cups in a row.

“He’s in great form, he’s full of himself and he’s ready to run but I’m afraid when you get 60mm of rain since Sunday and a bucket load overnight, I had to walk the track with Thady.

“All being well and we’ll do right by the horse, we could go to the Lonsdale Cup at York – it’s a race he knows well.

“We can look at races like the Doncaster Cup after that.”

Andrew Balding also pulled out his hope Spanish Mission on the account of the ground.

It left just the eight runners in the Group 1 with Trueshan now the Even money favourite and Santiago next in at 13-2.