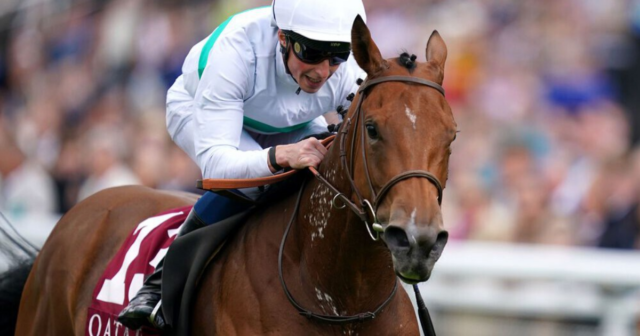 AS a new sprinting star emerged, an old one faded at Glorious Goodwood.

Hopes were high that Battaash could win an unprecedented fifth King George Stakes.

Suesa was an impressive winner at Glorious Goodwood

But Charlie Hills’ veteran was no match for the younger legs of speed queen Suesa.

The flying French filly fluffed her lines when hot favourite for the Commonwealth Cup at Royal Ascot.

She was coming in under the radar this time, but she must have come close to breaking the sound barrier as she soared home under William Buick.

Take nothing away from the impressive winner, but the focus after the race was very much on Battaash.

The seven-year-old has wowed racing fans since 2017, but he has been well below his best in two runs this year.

Age catches up with us all, and there are question marks over whether the old boy still has the same fire in his belly.

You could argue retirement talk is premature – he ran well for a long way at Royal Ascot last month after all.

But Shadwell supremo Angus Gold dropped the strongest hint possible that Battaash may have run his last race.

Battaash could be retired after his defeat in the King George

He said: “I think Battaash has done well to get back to the races. He had an injury last year and it took him a long time to come right.

“He’s had issues all his life and I think it’s remarkable that he’s back with us at all, let alone with four Group 1s to his name.

“After all the problems he’s had and him being seven, why would we go on now?

“He had such a brilliant year last year. He won three out of three last year and was at the top of the game.

“But he suffered a fracture last year and underwent surgery. The last thing we want to do is abuse him.

“Ascot I thought was a good run given how long he had been back in the yard. Today was not so good.

“I’ve got to speak to his owner Sheikha Hissa and until I speak to her, I don’t know.

“Obviously, Charlie and the team would like to keep him in the yard, but there comes a time for all of us.”

If Battaash does ride off into retirement, there is a worthy horse set to take his place as Europe’s top sprinter.

Suesa is one of the most hyped-up horses to have come out of France in several years, and on this evidence you can see why.

She moved menacingly through the race and was like a coiled spring ready to explode approaching the final furlong.

And she took off when Buick shook the reins, thumping three-time Group 1 runner-up Dragon Symbol by three lengths.

Buick said: “Suesa is an absolute sweetheart – it was an amazing performance from her.

“She travelled through the race strongly and once she got into it, she had that strong kick at the finish. She was very impressive, and she has a great attitude to go with it.

“She looked good in France before the Commonwealth Cup at Royal Ascot. The ground was bad that day and it was over six furlongs, and she had no cover.

“So you can probably give her a pass and I learnt a lot about her that day. She’s full of speed.

“She came back to five furlongs today and did it all so smoothly. She was hard on the bridle the whole way and showed a devastating turn of foot in the end.

“Her trainer Francois Rohaut was adamant that she was in good shape, and he was right.”

The Nunthorpe Stakes at York next month would be the logical next step for the three-year-old.

Her connections will take their time to mull their next target over, with York and the Prix de l’Abbaye on Arc day firmly in their thinking.

James Wigan, racing manager to owner George Strawbridge, said: “What she did in France before her run at Ascot was very impressive.

“We didn’t know what she’d be like against the older horses today, but we knew she was pretty good.

“There aren’t many top sprint races in France in the summer, so this was really the only place to come.

“York is something we’ll consider, it all depends what she is like when she gets back home.

“She has done a lot of travelling but has taken it well, so we will see. The Abbaye is the obvious race later in the year.”

If she does head to York for the Nunthorpe she will likely line up as a very warm favourite, with Coral among a host of bookies to slash her odds for the £400k sprint.

Spokesman David Stevens said: “It wasn’t to be for Battaash, with a fifth win in the King George beyond the sprinting star.

“But Suesa won at Goodwood with real authority and is the clear 2-1 favourite for next month’s Coolmore Nunthorpe having been 14s.”

Advertisement. Scroll to continue reading.
In this article:Ascot, Goodwood, York