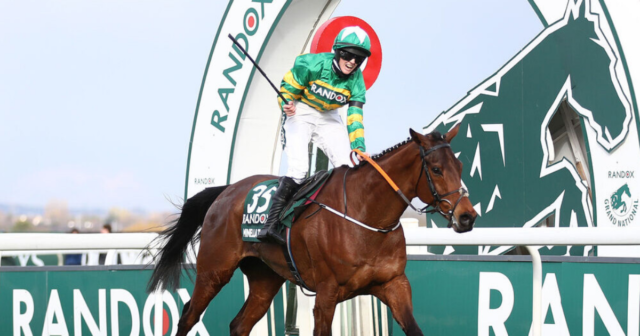 WHAT a season it has been on and off the track for punters in 2021.

We had a Cheltenham behind closed doors, a trailblazing winner of the Grand National and a truly epic Flat jockey title fight for the ages.

Can anyone replicate the feats of Blackmore in 2022?

There was an 80-1 winner of the Arc, Charlie Appleby demolishing all before him and a bullying case that split the sport in two.

Quite a lot to take stock of… but that’s exactly what Sun Racing’s writers have done with their 2021 awards.

Read on to see what our experts thought of all the action – and what they”re looking forward to in 2022.

William Buick has improved leaps and bounds in the last couple of seasons and his Breeders’ Cup successes on Yibir, Space Blues and Modern Games were absolutely top class.

Easy for me here. The pressure was on Tom O’Brien aboard Thyme Hill in the staying hurdle at Aintree after regular partner Richard Johnson had retired.

He delivered in the best fashion, with a power-packed effort for the master Philip Hobbs.

Thyme Hill and Tom O’Brien time it to perfection to take the @Ryanair Stayers Hurdle#GrandNational pic.twitter.com/G9nTZCv3q7

For pure joy of the relatively ‘small girl’ beating big boys it has to be Lady Bowthorpe landing the Nassau at Goodwood.

Owner Emma Banks was terrific in victory and trainer William Jarvis was crying before, during and for hours after the race.

Returns a BSP of 4.6 pic.twitter.com/BXOkaWkosO

Chacun Pour Soi in the Queen Mother Champion Chase. I defended him to the hilt and continue to do so. But he’s even testing my patience!

Oisin Murphy apologising for anything…

Shishkin bolting up in the Queen Mother Champion Chase.

As someone old enough to remember the fuss made when a ‘lady jockey’ even tried to ride in the Grand National, it’s great that two women led the way this year.

Hollie Doyle has been fantastic on the Flat with a Group 1 success for good measure.

But jumps racing needed a superstar jockey and Rachael Blackmore stepped up.

Her performances at Cheltenham were good enough but she went and topped it by winning the National.

Brilliant stuff and she’s a great character too.

A 3m Class 4 chase at Hexham doesn’t normally get the heart fluttering but the effort Sean Quinlan put in to win on For Jim really is the ride of 2021.

He was tailed off turning for home and most jockeys would have been pulling him up.

But plucky Quinlan kept pushing away and he eventually picked off his rivals one by one to strike on the line.

Never before has £3,800 prize money been harder won!

Niggled along in the rear throughout

Passes them all to eventually win by ½ a length

How good was Sean Quinlan aboard For Jim at Hexham yesterday?!

Maybe not the greatest race but the most exciting for me was the battle between Dragon Symbol and Campanelle in the Commonwealth Cup at Royal Ascot.

It came after a downpour so the ground was bottomless and these two speedsters went toe-to-toe right to the line.

It was decided in the Stewards’ room where Frankie Dettori persuaded them to reverse the placings and give Campanelle the race.

Even the Italian knew he was lucky but that second battle only drew the excitement out further.

The Breeders’ Cup was held at Del Mar in California, a track so tight that a big-boned greyhound would struggle to get round.

And it played out like your average dog meeting with front-runners winning most of the races.

For the self-styled world championships it was a poor spectacle. Maybe hold it at Monmore Green next year – it’s a more galloping track.

Racecourses with no crowds is the obvious one, but it would be nice not to see leading trainers giving peace signs while sitting on dead horses too.

I can’t wait for next year’s Champion Chase and hope the main players all get there in one piece. The thought of Shiskin crossing swords with Energumene keeps you warm on many a dark night.

William Buick pushed Oisin Murphy all the way in the jockeys’ race and won 12 Group 1 races around the world. He was dominant.

Bryony Frost’s front-running ride aboard Frodon to win at Down Royal in October, against the back-drop of the bullying scandal, was epic.

They lined up to give their best but Frodon repelled them all and produces an almighty front-running performance to hand @PFNicholls a fifth G1 Ladbrokes Champion Chase at @Downroyal under Bryony Frost pic.twitter.com/acuqJqQzWl

Poetic Flare won a thriller in the 2000 Guineas back in May, beating Master Of The Seas by a short-head with Lucky Vega just a neck away in third.

What did everyone think of Poetic Flare's victory in the 2000 Guineas then?!

Jim Bolger's runner snatched victory from the jaws of defeat to deny Craven winner Master Of The Seas on the nod having rallied really gamely!

Bolshoi Ballet was billed as Aidan O’Brien’s next superstar going into the Derby, but he was well-beaten and became a massive disappointment.

The Frost-Dunne bullying saga has brought shame on the sport. Hopefully things are going to change for the better going forward.

A couple of Charlie Appleby-trained monsters who could dominate on the Flat – namely Coroebus and Native Trail – and crowds returning to the Cheltenham Festival.

Marco Ghiani. A breath of fresh air on and off the track, the young Italian was champion apprentice and heads into his first full turf season without a claim. That shouldn’t stop him continuing his rise.

Adam Wedge. Secret Reprieve’s Welsh National win had the lot. A broken rein, a jockey that had suffered two nasty tumbles and a Welsh-trained winner.

Can you imagine the ovation former Gold Cup champ Native River would have got for kicking up the Sandown hill and providing the Tizzards with a rare moment to savour in a horrible 2021.

A stronger stayer than Native River we may never see!

Plenty of courage was needed to win the Cotswold Chase in the @Sandownpark mud.

Santa Barbara. Yes she won two Grade 1s, but we were told repeatedly she was the best thing since sliced bread. Her season was a damp squib when it mattered.

Bullying and bickering. The Robbie Dunne saga was ugly from start to finish and might not be done if an appeal is lodged. And for God’s sake, can trainers, owners and the BHA just grow up, put your egos aside and get on.

Cheltenham. After last year’s Festival Oasis, the crowds will be back at Prestbury Park like never before (hopefully).

The Brits look to have a stronger team going into March and let’s hope this means things are more competitive on the track, too.