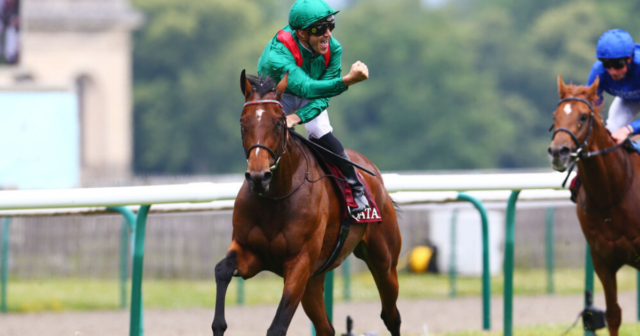 VADENI is the superstar racehorse who earns his ‘reclusive’ billionaire owner a whopping £1,300 every SECOND he runs.

The French Derby winner is big favourite to win the Coral-Eclipse at Sandown on Saturday.

The Aga Khan, a billionaire philanthropist and spiritual leader, has the favourite for one of Britain’s biggest races

Owned by spiritual leader and philanthropist the Aga Khan, Vadeni won as easy as you like when taking France’s big race last month.

He is a 2-1 shot with sponsors Coral to land the British Group 1 that has been claimed by the likes of Enable and Sea The Stars.

That’s mega money but, then again, all Vadeni has done during his short career is earn his owner a fortune.

Look at his winning times though and that equates to £1,300 per second on the track.

Victory on Saturday will of course take his career earnings well past the million pound mark and almost certainly set up an incredibly lucrative career at stud.

In racing, that’s where the real money is made.

The Aga Khan forked out £50,000 of his own cash so Vadeni could race in the Eclipse, his first jaunt on foreign soil.

Georges Rimaud, racing manager to the Aga Khan, said they are all looking forward to seeing how their potential world-beater gets on.

He said: “Everything is fine and all lights are green as much as we can know or tell.

“The horse worked well at Deauville yesterday and the ground was on what we call Good in France.

“He had a very nice action and was very pleasant so we decided to go ahead and supplement him as we had planned.

“Now it’s in the hands of everyone else but me!

“It is exciting and we certainly liked his performance in the French Derby when he impressed us with his turn of foot.

“Facing the older horses is probably a task but it’s an interesting one and we look forward to it.

“It’s time he got on with it and we’ll be better informed on Saturday evening as to what he’s capable of in terms of an autumn campaign.

“This is why we wanted to go to Sandown, it is the only race available over this distance in a good time from the Prix du Jockey Club.

“Personally the run at Chantilly didn’t surprise me too much because I knew he was going to use that turn of foot.

“He’d run in the Prix de Fontainebleau (at Longchamp, finished fifth) over a mile earlier in the spring and his sectionals showed he was capable of doing this.

“We knew he was a good horse and he needed to show it live as you would, he’s shown that now and we were very pleased that he confirmed what we thought about him.”

The Aga Khan, who pulled his horses out of Britain in the Nineties, is unlikely to be at the track on Saturday.

Maybe he can watch the race from his £200million private jet.

Did you miss our previous article…
https://www.sportingexcitement.com/horse-racing/i-might-be-disabled-soon-i-cant-give-up-now-brave-ms-sufferer-olivia-kimber-to-make-historic-jockey-debut/