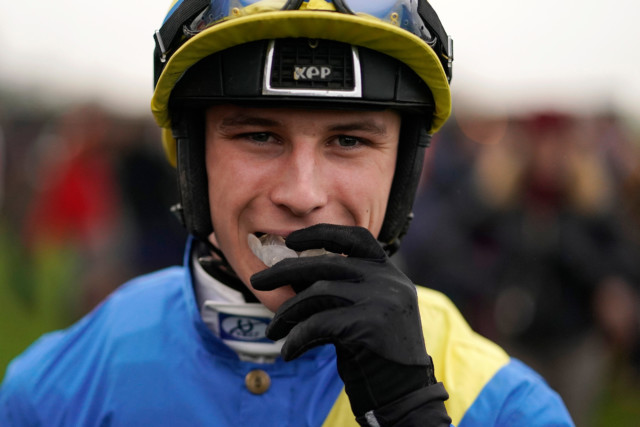 A YEAR ago he earned a virtual place in the Grand National record books…now Jack Tudor is determined to get there for real.

He’s just praying the outcome at Aintree in a week’s time is the same as the “cartoon” version which gripped the nation and raised millions for charity.

Last April, the teenage jockey found himself in the bizarre position of sitting in his lounge and cheering himself to glory in the world’s most famous horse race.

When the pandemic meant the National was postponed, a computer generated version was run, at the same time as the real thing would have taken place.

Victory went to Potters Corner, the Christian Williams-trained 18-1 shot due to be ridden by young Jack…once he had actually qualified to take part.

So Tudor, together with his parents and three sisters, tuned in back home in Merthyr Mawr, the tiny Welsh village outside Bridgend. And what a day it proved to be.

Potters Corner won, and 17-year-old Tudor was a National champion – equalling 1938 hero Bruce Hobbs as the youngest ever winning jockey. Only in reality, he wasn’t.

This time, though, there will be nothing virtual about it…although there are similarities, like carrying the same weight it had a year ago and starting around the same price.

And like 12 months back, there are plenty who reckon the team from the Valleys will be celebrating for real next Saturday.

Tudor certainly hopes so – and has every faith in his mount. He said: “Last year was brilliant, although I only really started focusing on Potters Corner over the last four or five fences.

“By then my mum and dad and sisters were all shouting – and by the time he got to the elbow so was I! That was a bit odd, cheering for yourself to win a race.

“It was a great thing to be involved in, but it would have been even better if I’d got my ten per cent for winning the race as well!

“I was working in Christian’s yard that night – there was only me and him in there, just keeping things ticking over – and there was a buzz about it all.

“He’s actually got a sticker with ‘Virtual Grand National winner 2020’ on the side of the horse box too.

“Potters Corner has won a Welsh National on way worse ground than this will be and we’ve got no doubts with the trip or his jumping. It will be lovely racing ground, so let’s see.”

At least this time there is no late rush to ensure young Jack has ridden enough winners over fences to take part, unlike last year, when he still needed two more before he could do so.

In reality it wouldn’t have been an issue – trainer Williams would have made sure of that – but waiting 12 months for his Aintree debut means he will go there a more polished pilot.

“Last year I needed a couple more winners to get qualified to ride in the race, but it was about three weeks away so I’m sure it wouldn’t have been a problem.

“Twelve months ago the yard was flying and I was confident and ready for it, but now I’ve obviously ridden a lot more since, so let’s see. They say practice makes perfect!

“I know the horse is a year older now, I will definitely go into the race as a better rider, a bit older and wiser. They do say practice makes perfect!”

The horse is part owned by Wales rugby star Jonathan Davies…and as a kid Tudor himself had dreams of Six Nations glory as much as Cheltenham and Aintree triumphs.

He was a decent scrum half, playing for the Vale of Glamorgan, and it was only when size DID start to matter that he committed totally to his other love of horses.

Tudor added: “When I was about 14 I was probably actually leaning towards rugby rather than racing.

“But they were trying to build me up in the gym and get me bigger, and that’s when I thought ‘this isn’t for me really.’

“Even though I’d played for my county, I decided to focus 100 per cent on racing, and it was a one-way street from then.”

A one-way street that could end with the biggest prize of all next weekend and also guarantee he is forever the subject of the greatest pub question of all.

Which jockey managed to win the Grand National twice but had only ridden in it once? Now that would be a place in the record books no-one would ever take off him.

In this article:Aintree, Cheltenham, Chepstow