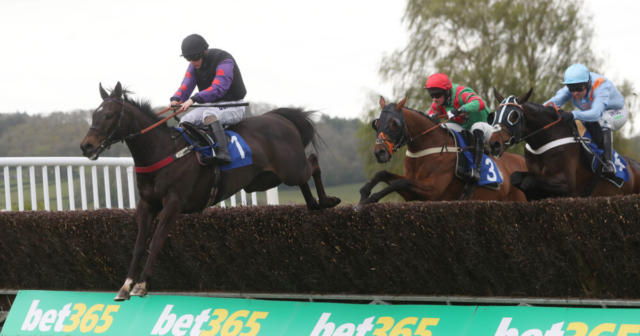 Our man has been in fine form lately so find out his pick for the Glenfarclas Crystal Cup Cross Country Handicap Chase.

GO with Flos. Second in the Grand National so has lots of stamina and was a fair fifth on this course last month. He has to give a stone away all round, which will take some doing, but he could run into the frame.

ALL Talk. Made his debut for this trainer over the course in November when never looking happy and unseating about halfway round. More than two years since his last win now and he’s struggling to even finish at present.

ALPHA fail. Losing run has passed three years with no placings since his 2019 Becher Chase third. Jumped round in his own time here last month before a modest effort at Fairyhouse. Looks too high in the weights on recent form.

BACK ON THE LASH 5

BACK him. He loved this track when landing a battling success here at last month’s meeting. He’s been upped just 3lb for that neck victory which came over this trip in similar ground conditions. He will be right there again.

Back On The Lash was impressive at Cheltenham last time

MIDNIGHT special. He’s landed a couple of wins since moving to Enda Bolger from Alan King and ran a cracker when second over Punchestown’s cross-country course last month. He looks the ideal type for this challenge and shaped like a stayer last time.

MOR needed. On long losing run and kept up his struggled when well beaten at Navan on comeback last month. Gordon Elliott’s Cheltenham runners are always respected but his form looks well short of this level.

ACTION Plan. Has run well at the Festival and enjoyed these fences when a close-up fourth here last month. He may have just needed that comeback run and he should be fitter to get up the hill this time. Won’t be far away.

BANJO tuned up. Won three chases in a row in Ireland before going down in a head-bobber on this track last month. A 2lb rise for that excellent effort looks more than fair and he’ll be right in the hunt again.

DIESEL motors. He won over this cross-country track in 2019 from 12lb lower and was involved in the blanket finish here last month when finishing third. Goes off the same mark today so should be competitive again.

ICY Blast. Came back from seven months off with a fair run over the Punchestown cross-country course last time but hasn’t won since 2017 and needs it soft to show his best. This looks a tall order.

POTT shot. Won the 2019 Welsh National but has largely struggled since including when sixth over this track last month. Has been poor at Haydock since but this longer trip will help. Coming down the weights but needs his best.

BRIDGE too far. Has a good record on Punchestown’s cross-country course and has jumped round here before. Should be fitter after his comeback but is 14 now and this looks tough.

FOX hunt. Yet to win in the UK and distant seventh here last month. Could improve for that experience of the track but needs miles more to figure.

DIBLO blow. Last won in 2017 and hasn’t gone close for a long time. Looked rusty on comeback at Punchestown last time when well beaten and is hard to fancy.

MAGIC trick. Has a decent record on the Punchestown cross-country track and won there in May. Looked in need of the outing there last time and should be sharper but this is much hotter company.

NOT so Super. Lightly raced over fences but hasn’t shown a lot so far including when sixth at Punchestown last month. Didn’t stay over 3m2f there and stamina looks a worry again.

BACK ON THE LASH can double up over this unique course.

He really took to the obstacles when winning at the November meeting after a right ding-dong battle. Martin Keighley’s chaser kept pulling out more up the Cheltenham hill when challenged.

He’s only seven and there’s every chance he’ll improve for that first taste of cross-country racing. A 3lb rise in the weights is more than reasonable.

Diesel D’Allier and Plan Of Attack chased him home that day and look his main rivals again.

The former has winning form here and should improve for that comeback effort.

Plan Of Attack made a big move three out but just couldn’t sustain it up the hill. He’s another who was returning from a break and may be fitter today.

Midnight Maestro is a potential improver for Enda Bolger. He went close at Punchestown on his cross-country debut and has more to come.

Did you miss our previous article…
https://www.sportingexcitement.com/horse-racing/robbie-dunne-found-guilty-on-all-charges-of-bullying-bryony-frost-after-seven-months-of-weighing-room-harassment-hell