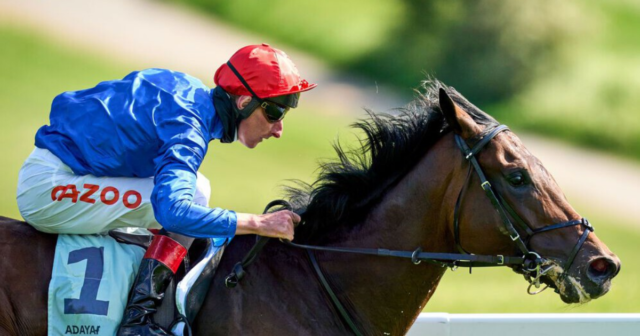 He turned the Derby into a procession in June and took another step forward when beating world-class Mishriff in the King George at Ascot.

Templegate has highlighted his pick in the Arc de Triomphe

Stablemate and St Leger winner Hurricane Lane looks a big threat with his stamina coming into play if it gets testing. Tarnawa and Snowfall provide a strong Irish challenge but both need their very best.

TOR blimey. Won a German Group 1 over this trip on firm last time and has gone well on soft. This is much stronger and hard to see him figuring.

DEEP heat. Won the Prix Foy here last time over C&D ahead of Broome. Can confirm that form and could nick a place if handling slower ground.

BROOME swept up. Ballydoyle third string who was hammered by Adayar in the King George and beaten by Deep Bond here last time. Handles soft but should come up short.

TAR very much. High-class mare who landed two Group 1s here last season before winning at the Breeders’ Cup. Dermot Weld has laid her out for this and she went close behind St Mark’s Basilica last month. Stays, handles any ground so a major player.

LOVE hurts. Won the Oaks by nine lengths last season and took a Royal Ascot Group 1 before three quieter runs. Deserted by Ryan Moore and Frankie will have to be at his very best.

HAH ha. Fifth in this last year and good win at Deauville when last seen in August. Booked for a similar finish 12 months on.

GEN up. Main Japanese hope who pushed Mishriff close in Dubai before a good Group 1 win last time. Ground unknown but trip suits and Oisin Murphy is on board. Chance.

LOST Mojo. Decent second to Hurricane Lane in the St Leger and filled the same place in the Derby behind Adayar. Hard to see him turning that form around.

ADS up. Impressive Derby winner who followed up by beating Mishriff in the King George at Ascot. Has gone well in the mud and has lots of staying power. There’s more to come after just six runs and he’s the one to beat.

IN a Hurri. Won the Grand Prix De Paris on soft over C&D before an easy St Leger success. Ground and track suit and he has enough class to drop in trip. Ditched by William Buick but still a massive threat.

WAY to go. Good second in the French Derby on last run and he finished like this longer trip would suit. Big price if repeating that effort after a break.

ALEN keyed. Beat Adayar in April and loved the mud when scoring at Royal Ascot. No match for Hurricane Lane after that and needs a fair step forward.

BURST Bubble. Was ten lengths behind Hurricane Lane in the Grand Prix De Paris and this looks beyond him.

FALL on rise. Beaten at 1-5 in the Vermeille here last month but O’Brien horses are in much better nick now and she won the Epsom and Irish Oaks in style. She stays well and can bounce back to hit the frame.