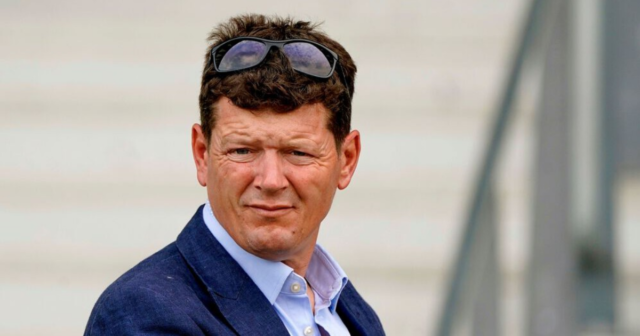 SANDRINE looks a machine in the Lowther Stakes.

Andrew Balding’s youngster has hammered all rivals this season and already has a couple of Group victories on her CV.

Andrew Balding sits at the top of the trainer championship

She was impressive when taking the Albany Stakes at Royal Ascot before stepping up again to land a convincing Duchess Of Cambridge success. Anything like that Newmarket performance can see her strike again.

Zain Claudette and Desert Dreamer had a right battle for the Princess Margaret at Ascot and will be fighting it out for the forecast spot.

Outside World is a potential improver in the field under Frankie Dettori after scoring over course and distance last time.

SAND stormer. Looks a superstar in the making after three unbeaten runs. She was impressive when taking the Albany Stakes at Royal Ascot before improving again to take the Group 2 Duchess Of Cambridge at Newmarket. She has to give weight away here but is proven over the trip, handles any ground and looks hard to beat.

DREAM alive. Was a fair third to Sandrine at Newmarket before going down to Zain Claudette in a head-bobber for the Princess Margaret Stakes at Ascot last time. Her best has come on fast ground so any rain would be a worry but she’s a live contender again.

DREAM on. Has yet to get off the mark in three modest maidens including when beaten four lengths at Windsor last time. She’s stepping up from the minimum trip today but looks well short of this class.

HELLO can go. Has seen the back of Sandrine on her past two outings but has still run well each time. She has moved from Ralph Beckett to David Loughnane since her last outing and has performed on fast and slow ground. Hard to see her winning but another podium place wouldn’t be a surprise.

ILL looks healthy. Has run only over 5f so far and was a solid fifth in the Queen Mary at Royal Ascot before taking a fair race at Glorious Goodwood with plenty in hand. She looks likely to see out this trip and has plenty of pace. Not ruled out on this hike in grade.

AYR of caution. Got off the mark in a Hamilton egg and spoon race last time after going close at Listed level in Ireland. Has yet to race beyond the minimum trip and needs a fair bit more in this company.

NIN the hunt. Won a Newbury maiden on debut before major improvement to finish fourth to Zain Claudette in the Princess Margaret Stakes at Ascot. Can improve further and could run into the places at a big price on just her third outing.

DORA needs mora. Got off the mark with a Listed win over 5f here in May but hasn’t really gone on from there. Was held in the Queen Mary at Royal Ascot before another middling effort in the Molecomb at Glorious Goodwood. Needs to raise her game although that track win is a plus.

LOOK Outside. Booking of Frankie Dettori catches the eye after she went from the front to win a modest contest over course and distance last time. Trainer Mark Johnston is in good form and wouldn’t be coming here for a day out. Needs more but one to watch.

VERT hurt. Yet to win but went well enough in the Queen Mary at Royal Ascot before flopping when odds-on at Kempton last time. She still looked green there so should improve but really needs to.

ZAIN gain. Won a Newmarket maiden before improving massively to take the Group 3 Princess Margaret Stakes at Ascot last time. She finished strongly over this trip there and firm ground was ideal. Has more than repaid her £20,000 sales price and can take another nice chunk of prizemoney for hitting the frame.