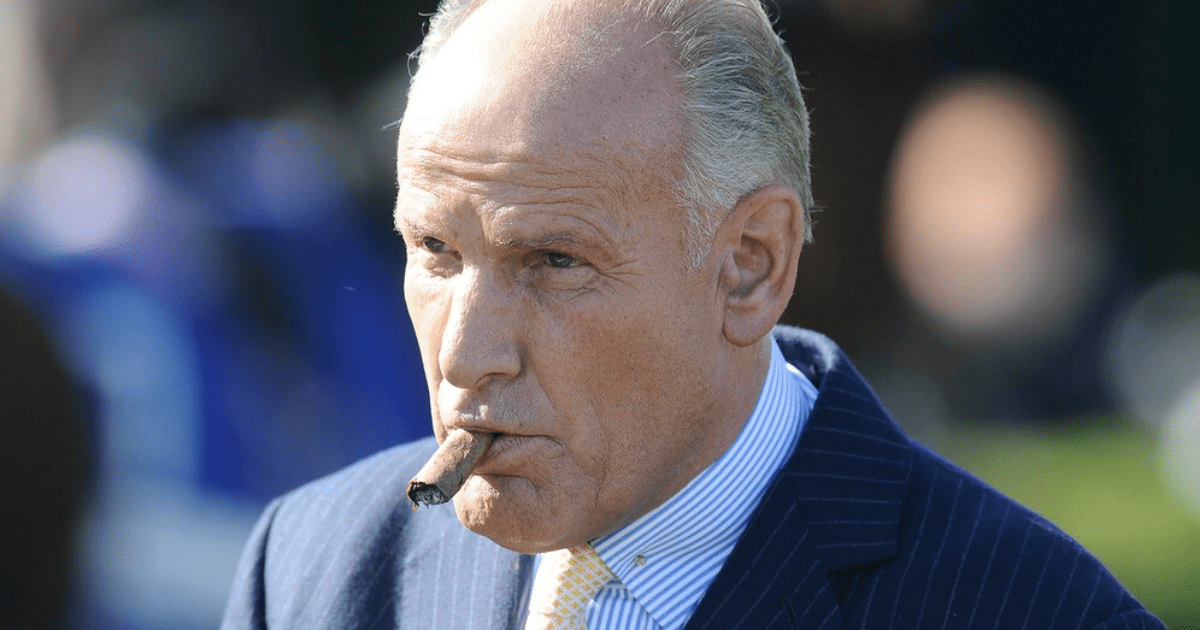 SIR MARK PRESCOTT is one of racing’s great characters.

As old school and eccentric as they come, you will never catch the 74-year-old without his trademark pinned collar and tie.

Sir Mark Prescott, as eccentric and old school as he may be, is one of the true legends of racing

Could brilliant grey Alpinista give Sir Mark an unforgettable win in the Arc?

The baron runs a tight ship at his historic Heath House yard at the bottom of Warren Hill in Newmarket.

On a rare visit a few years back I feared for my life when I walked across the perfectly cut lawn next to the ‘do not step on the grass’ signs.

But as strict and demanding as he may be, no one would begrudge Prescott a famous Arc win with his brilliant five-year-old mare Alpinista.

His gutsy grey has won seven races on the spin, five of them Group 1s, and has plenty in her favour as she heads to Paris under Luke ‘The Sniper’ Morris.

Prescott has won Group 1s all over the world, but a victory at Longchamp would comfortably be the biggest of his remarkable 53-year career.

He said: “She is simply an amazing filly.

“She’s improved all the time and her great gift is that she’s straightforward.

“She goes on more or less any ground and tactically she is very versatile.

“It’s like people, if they’re very straightforward, it’s amazing what you can do.

“She’s good enough to go close. We’ve got a chance, and therefore we had no choice but to go.

“I just wouldn’t want it to be very soft.

“She did her last piece of work last weekend and we were very happy. Everything has gone to plan.

“I can’t even complain about the draw, either. It’s perfect. At the moment she is the best mare in the world.

“But that can all change very quickly indeed!

“I’ve only ever had one runner in the Arc, Foreign Affairs.

“As wonderful as that was, it’s a bit different this time! There is just a little more pressure.”

Prescott, educated at Harrow School like his role model Winston Churchill, is seen as a father figure of the Newmarket training scene.

Incredibly loyal, Prescott has remarkably only had three stable jockeys throughout his whole career.

Morris is currently in the hot seat, with Seb Sanders and George Duffield the only other two riders he has used on a permanent basis.

Prescott, who lives on his own and is up before 4am every morning, joked: “I have often looked at other women, but never at another jockey.”

While the new generation of trainers prefer a flash Land Rover, Prescott still drives his ancient but reliable white Toyota on the Heath each morning and, until a few years back, went through ten Cuban cigars a day.

He will chastise any young pup brave enough to venture on to the gallops each morning not clean-shaven. Prescott famously opened his yard to the public for the first time two summers ago as part of the Open Weekend.

But only because chairman Charlie Fellowes remained stubble-free for a year.

Over the decades Prescott has seen many a big name come through his yard and then go on to great things.

HIT OVER HEAD WITH PAN

They include Simon Crisford and his former assistant William Haggas who he would have been up against at Longchamp had he not bottled an Arc bid with unbeaten superstar Baaeed.

Prescott has regularly retold the infamous tale of how during Haggas’s first week on the job.

Prescott had to wake a dozing Haggas up by bashing him over the head with a frying pan when sleeping in after a night on the tiles.

You do not miss Prescott’s strict pull-out time of 6.15am in any circumstances.

Haggas has gone on to make Prescott proud but that doesn’t stop the trainer from having a pop at his old pupil.

He joked: “If William had had any thought for his old guv’nor he’d have left Baaeed in a bit longer before taking him out! He would have frightened a few off!

“But anyway, at least we don’t have to race against Baaeed.

“Although, that said, I would have liked a crack at some point!”

Like several of the best horses to pass through Prescott’s hands, Alpinista runs in the green and white colours of Kirsten Rausing, who has owned five generations of the mare’s family.

Yet if Prescott had it his way, he would not even be travelling to Paris this weekend to watch Alpinista.

The veteran prefers his home comforts and is only heading across the Channel at the insistence of his loyal owner.

‘I HATE BEING AWAY!’

Prescott laughed: “There is plenty of pressure, the sales are on at the moment and I hate being away on a Sunday!

“It will be very, very busy trying to do that and go round all the yearlings before, too. But, if Alpinista wins it will be no trouble at all, will it?

Hooray, Pivotal, Marsha, Confidential Lady and Comic Strip have all shone at the top under Prescott’s care.

The prolific Alpinista will eclipse them all if she can strike in the Arc.

Prescott is just as happy to plot up a hot and cold handicapper as he is taking on the best in the world.

But there is still a glint in the eye of Prescott as he dreams of lifting the most famous trophy in European racing.

His current assistant William Butler has been his right-hand man for over 20 years now.

Yet even if Alpinista shines on the biggest stage of all, the wait for succession is to go on a couple more years.

Prescott said: “Everyone seems to think if Alpinista wins I will be announcing I am retiring.