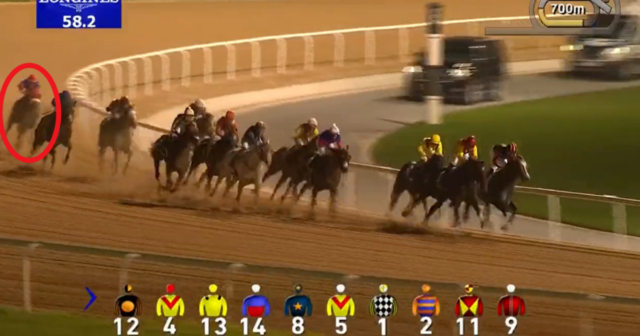 HE has been labelled the Ivan Drago of racing and the Russian Rocket for his jaw-dropping finishes.

But all his connections will care about is that he keeps winning lots of money from seemingly impossible positions.

A quite extraordinary victory at Meydan @RacingDubai

Keep an eye on the horse in last as this clip begins.

Because few horses ever in the history of racing have employed such apparently bonkers tactics as Azure Coast.

The Russian-trained horse is turning into a real cult icon among fans thanks to his ability to grab victory from the jaws of defeat.

We first saw one of the three-year-old’s freaky finishes in a race at Meydan in December last year.

Held up in last in the 7f contest, Azure Coast didn’t bother trying to get past anyone until two furlongs out.

But when he put his foot down, this son of Street Sense sure packed a punch just like his Rocky namesake.

He absolutely motored home and won by a head at 14-1, scooping a decent £14,300 cheque for owner and ex-jockey Vladimir Kazakov.

No one saw it coming.

In reply to a clip of Azure Coast’s amazing finish, one viewer joked: “This is how TVs get broke down the local bookies.”

The fact no one thought such a weird finish to a race could possibly happen again so soon later was probably confirmed in Azure Coast’s 15-2 odds for his next assignment.

There, back at Meydan in Dubai last Friday, he was stepped up in trip to a mile by trainer Pavel Vashchenko.

But the extra furlong – roughly 200 yards – just played into his hooves even more.

Done it again! The Russian raider Azure Coast comes from miles back to win the UAE 2000 Guineas under Antonio Fresu

Starting in stall eight, Azure Coast was slow and sluggish into stride.

Others shot out like a bolt but the beast from the east just waited and waited… and waited.

Then, with three-quarters of the contest gone, he sprung into life.

Instead of 30 lengths behind, he was 20, then ten, then suddenly he was vying for the lead on the outside as the post approached.

With 100m to go he was a length in front and at the death won by an official margin of two lengths under jockey Antonio Fresu.

With victory came a cheque for £66,666 and his third win in three career races.

Fresu said he was ‘stupid’ for not riding Azure Coast in his other win at the track.

Speaking after his latest victory, the jockey said: “This is a very good horse.

PREDICTED TO GET EVEN BETTER

“Stupid of me I didn’t chose to ride him last time as I thought 7f was way too short.

“But last time he showed even over seven that he has lot of ability.

“This time, I took my time I didn’t ask him for too much in the beginning. In the last furlong it was very easy. He will get better over distance.”

Those last words could be particularly telling.

As one punter who watched Azure Coast’s latest victory commented: “This horse is the real deal.

“Have followed his family for decades as one of our first mares was from this family. Consistently throws top class runners. Certainly bred for the Kentucky Derby.”

A Russian winning in America?

Ivan Drago couldn’t manage it in the films, but maybe Azure Coast can in real life.