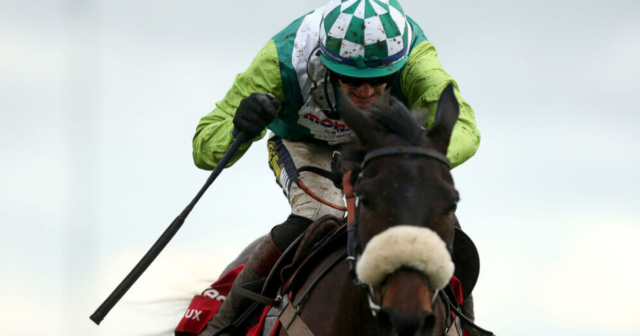 MERRY Christmas everyone – and the waiting is finally over!

No, I’m not talking about it being Boxing Day and the magical Ladbrokes King George VI Chase at Kempton live on ITV.

I’m referencing the fact we finally get to see the dual winner of the race Clan Des Obeaux, who is amongst a group of star jumps horses who have yet to appear this season.

The other culprits to be noticeable absentees include, of course, leading Champion Chase hope Shishkin and dual Gold Cup hero Al Boum Photo.

Throw in Stayers’ Hurdle favourite Klassical Dream and last season’s leading novices Appreciate It – now set to remain over hurdles – and Sir Gerhard then one can’t help but ask: “Fancy being a racehorse and racing?”

For racing fans Christmas is only about today’s feature three-mile charge.

That’s not good for those trying to spread the word of the birth of the Christ child.

But it’s not all bad news on that front, because if there is a God then surely last night he will have sent a dreamlike image highlighting today’s big Kempton winner!

You can’t single out one great King George victor. There have been so many.

Depending on your age, for some of you Wayward Lad beating Fifty Dollars More and Silver Buck in 1982 will be top of the list. It’s impossible to think there have been many better races.

But then there was Desert Orchid, the ‘silver shadow’ who landed the contest four times, and The Fellow and One Man.

Who can forget Challenger Du Luc cruising up to See More Business, only to do a ‘Harchibald’ when push came to shove, or Barton Bank’s famous last fence blunder. Kicking King also smashed through the last on one of his winning efforts, although unlike Barton Bank he survived.

Those memories alone put fire in the Christmas belly. And today we might see something special once again.

Clan Des Obeaux did this column a favour in both his King George victories, and he’s fresh this time having possibly not been suited by going to Haydock before his defeat by Frodon twelve months ago. He’s sure to spot on for champion trainer Paul Nicholls.

However, this is an absolute belter of a King George and much tougher than when he landed his victories. Clan Des Obeaux will have to be better than ever.

Talking of the defending champion, Frodon, he was magnificent on his return at Down Royal where he had the Gold Cup winner Minella Indo back in third.

It’s not impossible Frodon can do it again for Nicholls bidding for a record thirteenth success in the big race.

However, I can’t help but feel Minella Indo is the one to beat for Henry de Bromhead and lady-of-the-moment Rachael Blackmore.

Some say Minella Indo prefers going left-handed, but that’s forgetting a massive Grade 1 success at Punchestown over Allaho. He’s no one-trick pony. At the age of eight he’s also relatively lightly raced with just fourteen races under his belt, so there may well be more to come.

Of the others, Chantry House has D-Day for Nicky Henderson and Nico De Boinville. The son of Yeats is on a five-timer after wins including the Marsh at Cheltenham and a Grade 1 at Aintree. He could be anything and was once third to Shishkin in a Supreme.

Lostintranslation is also back, having been horrible in this event in 2020. He’s on his second run after a wind operation for Colin Tizzard, and his first was useful with a fine win at Ascot. He’s another that’s could score and wouldn’t do so as a huge surprise.

Asterion Forlonge, who is joined by Tornado Flyer for the champion of Ireland Willie Mullins, is clearly talented but rarely delivers. Huge ride, though, for Bryan Cooper.

There’s no doubt we are in store for a Kempton festive cracker. With the BBC’s World Sport star of the Year on top I’m hoping Minella Indo can be King for the Queen of racing.