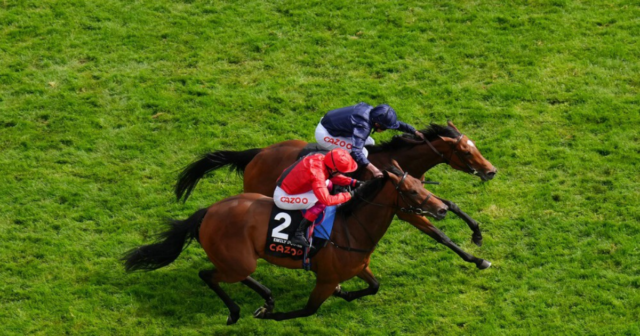 IT was Tuesday’s day in the Oaks as red-hot favourite Emily Upjohn could only finish an agonising second.

The 13-2 shot held on by a short-head in a head-bobbing finish at Epsom to give trainer Aidan O’Brien a record 41st British Classic – but that doesn’t tell half the story.

Tuesday (far side) held on to win the Oaks at Epsom

The 6-4 jolly Emily Upjohn lost several lengths after stumbling out of the starting gate and she was only denied by a matter of inches at the end of a mile and a half.

She made up a huge amount of ground along the stands rail and was roared home by the majority of the huge crowd on the Downs.

But Tuesday and Ryan Moore, who had expertly slipped through a gap at the top of the straight, battled on bravely to bag the fillies’ Classic in dramatic fashion.

Nashwa (4-1) was a fine third under Hollie Doyle, whose podium finish is the best result ever for a female jockey in a British Classic.

Earlier on the card, Hukum (11-4) bolted up in the Coronation Cup to give trainer Owen Burrows his first Group 1 winner.

The classy five-year-old travelled like the winner throughout and quickened clear of Pyledriver inside the final furlong to win by a shade over four lengths.

An emotional Burrows, who revealed he had to lay off some of his staff after numbers in his yard dropped, said: “He’s been a wonderful horse for me.

“He’s won numerous Group 3s, then the Group 2 in Dubai, and then he ran probably his best race there in the Sheema Classic, when he was drawn a bit wide, they didn’t go very quick, and he was only beaten about a length and a half.

“I always felt that there was one of these in him and I’m just thrilled he’s done it – for myself and for the team back home.

“It’s been well-documented it’s been a tough 12 months, and also for the horse himself. I’m thrilled for everybody.”

Advertisement. Scroll to continue reading.
In this article:itwas, theoaks, thestory